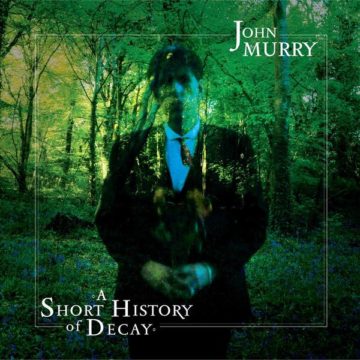 Some artists suddenly crop up, come up with some brilliant music, get critical accolades, and then, as if there is an invisible border, they simply cannot cross it. It can be that the audience for some reason or other does not pick up on him, one runs into a series of unfortunate events, not his own doing, that one turns up as a stumbling block, or that it is due to a series of unfortunate events of his own doing come up. Sometimes it is all of the above.

In case of Mississippi singer/songwriter John Murry it is all of the above, and it seems that all of that has been musically and lyrically noted down on his new, second album, A Short History of Decay, an apt title if there was one. The story behind the album is interesting, and in a way, as haunting as the album itself.

To start things off, Murry was at adopted at birth by the family of master writer William Faulkner. From there on, the story gets even more perplexing – it seems he had undiagnosed autism, and after using both prescription and illicit drugs, Murry was institutionalized for mental health problems. He ended up on the streets, then in San Francisco, then on heroin and near death.

Somehow, he became interested in music, and with the mentoring of the late American Music Club guitarist Tim Mooney, he got the chance to record his debut album The Graceless Age in 2012. Both key British music monthlies (Mojo, Uncut) hailed it as a masterpiece.

After Mooney died, Murry’s problems with more or less everything, including losing his family and ending up in jail came back, and it took him five years toget back to music and recording this album, , with the help of the Cowboy Junkies leader Michael Timmins.

So, Toronto recorded A Short History of Decay practically recounts everything that went on, and it is a harrowing, but at the same time captivating listen.

The first thing you notice is that Murry has a great singing voice, and that, as was already evident on The Graceless Age, he has a penchant for great melody, as is evident here too. His lyrics are yet another story. Expressing your personal experiences, especially if life has hit you hard, is not as easy as it seems, but when it works, it reaches the realms of poetry, and Murry is getting close to that here.

Musically, Murray has a perfect foil in the Timmins brothers, Josh Finlayson (Skydivers), and Cait O’Riordan (The Pogues, Elvis Costello), whom Murray brought along from his exile in Ireland. It is when Murry is in a darker, slower mood that the music and lyrics work the best, while more up tempo numbers like “Under the Darker Moon”, can remind of Moody’s former band, American Music Club.

While it is hard to fault any songs here that work the best as a song cycle that they are intended to be, it is the opener “Silver or Lead”, and the closer “What Jail Is Like”, that give the strongest impression.

This is another impressive album from John Murry. Maybe it will let him escape murky waters this time around and get him the recognition he deserves.

Formerly a lot of things, including a journalist and a translator, currently a freelance writer living in The Netherlands.
RELATED ARTICLES
album reviewslatent recordings
9.0