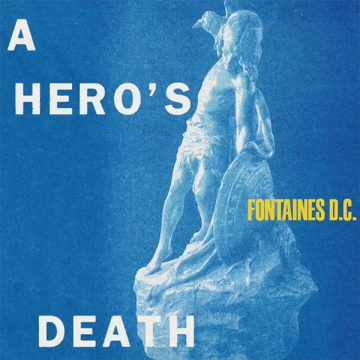 A Hero’s Death, the followup to 2019’s highly acclaimed Dogrel, is an introverted, thoughtful, and oftentimes melancholy album that was shaped largely by the months of touring and promoting of the band’s debut. Where Dogrel was often intense and almost sonically uplifting, A Hero’s Death sounds like a band that has been worn down, its brighter edges dulled by the rigours of being a highly-acclaimed young band.  Here there are more layers, more conscientious chaos especially from the guitars, with many of the songs seemingly questioning and reflecting on the realities of life. Though the authentic, everyday-life approach to frontman Gran Chatten’s lyrics remains, there is a slightly downtrodden feel that permeates the majority of the songs; it is not that the band has only learned life’s lessons the hard way, but it is abundantly clear that few have been learned the easy way.

The album starts somewhat hesitantly but hits its stride full-on by track five, “Oh Such a Spring”, and explodes into life with the caustic gem “Living In America”. The theme of questioning and reflection – where do I fit? How does this work? Why do I feel this way? – is clear throughout, but there are also moments of dark humour, based on observations made by a man clearly used to spending time in his own head.

Reminiscent of early Interpol but with the guitars tuned down perhaps, A Hero’s Death is an album that is unafraid to look life in the eyes, but by the time life has looked back, finds itself looking at eyes that have now turned downcast, not out of fear but perhaps resignation. It is not perhaps as bleak as all that, but it is also not for the faint of heart.

Br. lives in southern Ontario, grew up on The Beatles and The Journeymen, spent his adolescence immersed in grunge, and his adulthood in British alternative. His greatest joy is seeing his son dance and grow into his own appreciation of the indescribable joy of music...
RELATED ARTICLES
album reviewalbum reviewsfontaines d.c.
8.0