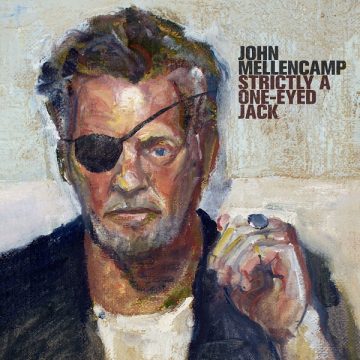 With his 25th album, Mellencamp portrays himself as a wisened, reflective musician. The days of “suckin’ on a chili dog outside the Tastee Freez”, are far behind him and he no longer feels he needs to prove that his is still a young lion.

Mellencamp’s self-produced work, Strictly A One-Eyed Jack, presents a number of sombre pieces where the 70-year old spits out dire warnings that come from experiencing life’s battles and observing much of the world going to hell in a handbasket. In “Streets Of Galilee” he proclaims “Well I don’t grovel and I don’t pander/Give a fuck what you say”, and in “I Always Lie to Strangers”,  Mellencamp warns that “The world is run by men/Much more crooked than me”. Even in the more upbeat “Wasted Days” featuring Bruce Springsteen, the singer from Indiana wonders “How much sorrow is there left to climb?/How many promises are worth the time?”

However it is not all regret and venom in this album. In the hopeful “Chasing Rainbows”, Mellencamp sings that “At the end of the rainbow/Turns out it’s not somewhere/Look around it’s everywhere/For anyone who cares”.

Okay John…you’re not a bitter old man. But I miss the days when you were rebelling against, and your days of drinking at the bar and finding the perfect partner to dance with.

An educator who also tries to introduce others to great music. It's a never ending job.
RELATED ARTICLES
album reviewalbum reviewsbruce springsteen
9.0