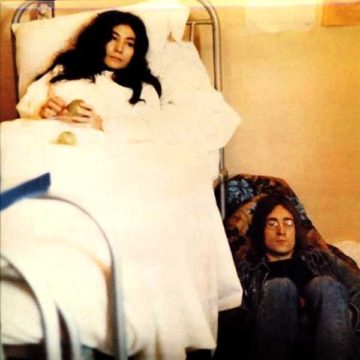 The second release in the Secretly Canadian/Chimera Music “Yoko Ono Reissue Project.” The front cover tells the story of the album, Yoko Ono in a hospital bed with John by her side on the floor. This is an album full of pain, and it is clear.

What has to be understood, is that this is not so much an album, but an experience, an emotion and a document of time in John and Yoko’s life. Originally released on the Apple subsidiary label Zapple in May 1969, this album has not been on vinyl since those original pressings. It was reissued on CD in 1997 with bonus tracks. Those bonus tracks appear on the new CD and the download, but not the album. The project is overseen by Ono and Sean Lennon (who owns Chimera Music) and the vinyl is an exact replica of the original Zapple release, inner sleeve and all. Side one of the album is John’s debut solo performance with Yoko, recorded in 1969. The 26-minute song, “Cambridge 1969,” features John’s feedback with Yoko’s unique vocal stylings. Side two is more of a document; “Two Minutes Silence” follow the sound of their unborn baby’s heartbeat (“Baby’s Heartbeat,” and sadly the child was miscarried). This is sound. Painful sound and silence. The bonus tracks are an excellent addition, and well worth downloading (the album comes with a download card), especially “Mulberry,” which Ono rerecorded on a later solo album (Blueprint For a Sunrise, 2001) Not for the faint of heart, and not for everyone. To understand Lennon’s art, however, one must give this album some consideration. Lennon noted in interviews that working with Ono allowed him to express himself and be more honest with his playing.

Born and raised in Whitby, Aaron discovered music through his love of The Beatles. This led to a career in radio, writing for various publications, and ultimately a radio show about The Beatles (Beatles Universe), which ran for over four years. When not immersed in music, Aaron enjoys spending time with the loves of his life -- his wife Andrea, and daughters Emily and Linda (all of whom have an intense love of music too).
RELATED ARTICLES
album reviewsjohn lennonsecretly canadian
7.0