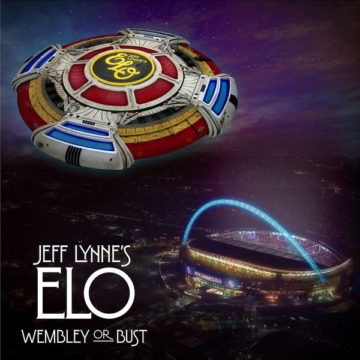 Formed in 1970, and seemingly as popular as ever, Jeff Lynne’s Electric Light Orchestra have always been known for their epic live shows, that bring together pop, rock and classical music forms. With over 25 Top 40 UK singles, Lynne has created some of the most memorable music of the last 40 years, and has sold over 50 million records worldwide.

Now at the beginning of an ELO Live World Tour that brings him to Toronto’s Air Canada Centre on August 18th, Lynne puts out his first album since 2015’s Alone In The Universe. Released by Sony Music in multiple formats, including a double CD, a triple vinyl set and a DVD, Lynne says that the experience in front of 60,000 rabid fans, was the best time he’s had in music. All their hits, like “Evil Woman,” “Shine A Little Love,” “Sweet Talkin’ Woman” and “Turn to Stone” are included on the soundtrack for the film “Wembley or Bust,” directed by Paul Dugdale. Lynne even includes the tune “Handle With Care” that he did with his Traveling Wilbury mates Bob Dylan and the late Roy Orbison and Tom Petty.

A legendary performance from a world-class band.

Gerry Young is President of Current Records and Management, and author of the 2011 biography Pop Goes The Weasel: Rock And Roll Off The Record, available at Indigo/Chapters, Barnes & Noble, and Amazon.com. He has recorded and managed Juno Award winning bands Martha And The Muffins and The Parachute Club among others.
RELATED ARTICLES
album reviewsbob dylanelectric light orchestra
8.0