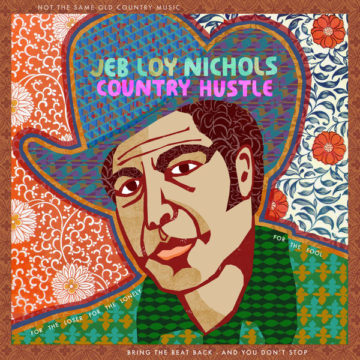 Jeb Loy Nichols has been around a while in the music business, the fact that he is not a household name is a shame, as he has produced, written and performed some of the most unique and entertaining music over the past 20 years.  Also, according to his bio, he saw the original Sex Pistols in Texas during their first and only U.S. Tour.  That puts him high up in my books.

This new album, Country Hustle, released on his City Country City record label.  He has been down the major roads before, and one gets the sense that he belongs on an independent label.  Basically, let him do what he does best, create incredible, unique music. ,

While listening to his new album, his first since 2012’s The Jeb Loy Nichols Special, I kept trying to figure out the category in which to place him.  Impossible.  He fuses all types of music into one.  The song. “Katie Blue” is an excellent example of mid seventies sounds, mixed with 90’s beats  with jazz backing.  It may sound like it does not work, but it does.

Jeb’s voice is another force to be reckoned.  He can let loose and while being reserved at the same time.  He also structures the album in such a way that everything links and builds up to the next song.  For example, “Till The Teardrop Stops”, a wonderful ode to ‘70’s soul leads right into a cover of Luther Vandross’s “Never Too Much”.  Beautiful sequencing!

The album is an overall wonderful listening experience.  Nicely produced, but not too slick.  And the last two tracks are true highlights.  The bluesy and laid back “Regret” (no, not a New Order cover) blends into “Long Live The Loser Pt. One and Two”.  “Regret seems to be his manifesto ‘people in the world I need to talk to, I need to confess, say I made a mess with all these regrets’, honest and yet with the Prince like music going on behind him, almost defiant.   This rolls into the almost dub like “Long Live The Loser Pt One and Two” which ends with what amounts to a lo-fi stand and deliver.  A brilliant ending to a truly original album.