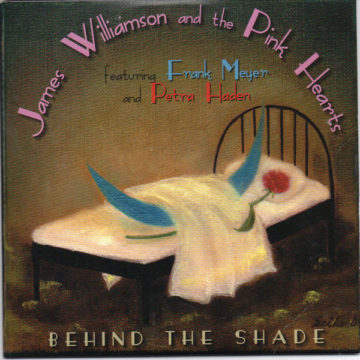 With an illustrious career as a songwriter and guitarist for nearly fifty years, most known for playing on The Stooges’ landmark 1973 release Raw Power, James Williamson has turned his attention to his latest collaboration and first record since 2014’s Re-Licked. On Behind The Shade, Williamson and The Pink Hearts, consisting of The Streetwalkin’ Cheetahs’ vocalist Frank Myer, and singer, violinist, and composer Petra Haden, soar over a collection of 11 tracks that bring rock & roll back to its roots with an array of influences stemming from punk, classic rock, the blues, and folk.

“Riot On The Strip” opens the album with a blast from a crunchy and fuzzy guitar and Myer’s aggressive vocals. Haden’s voice, while just as strong, adds a sense of warmth to the fast paced flow of the verse. The vocals, despite being very much influenced for ‘70s punk – most notably that of Iggy Pop and an American John Lydon – stand out for not only their raw energy, but also the lush harmonies between the two singers. “Riot On Sunset Strip” is among the most hard hitting tracks on the record and captures some of Williamson’s best guitar playing on the album; with a tone that sounds as if it was pulled straight from ‘73. His playing remains as fiery as it was on The Stooges’ classic “Search And Destroy”, but more refined.  While not quite toned down, his playing is tighter, and his soloing and lead lines reflect a more sophisticated taste that feels slightly reminiscent of Keith Richards. The album continues with a slower rocker, “Judith Christ”, a track that sounds like Van Morrison cranked up to eleven that features an infectious piano line, while “This Garden Lies” feels like Ziggy era Bowie taking a trip down the French Quarter of New Orleans with its accenting horns and explosive trumpet solo.

Behind The Shade proves to be a versatile album with its inclusion of multiple slower tracks and ballads that demand as much attention as the rockers mentioned previously. While the Haden led “Pink Hearts Across The Sky” and acoustic “Miss Misery” capture a softer and slightly folky energy, the album’s title track stands out as a beautifully written composition.  “Behind The Shade” is a track that follows a winding journey that will leave the listener surprised by not only the creative direction of the song, but the raw sense of emotion in the performance with Haden adding stirring violins, while Myer shreds his vocal chords belting out the songs dark lyrics. In short, “Behind The Shade”, all on its own, is a masterpiece.

It’s clear that among the harder hitting songs, also including “You Send Me Down” and “The Revolutionary Stomp”, punk rock plays only a small part in this stage of Williamson’s career as he experiments with a number of different elements and influences. The ballads also demonstrate how far away from his roots he strays as he plays with tones, structures, and textures closer to folk and contemporary rock for the sake of delivering a highly emotional track. While being a thoroughly enjoyable and dynamic record, Behind The Shade is a new career milestone for Williamson that only furthers the narrative of how he continues to push the boundaries of music, and his own legacy, through his guitar playing and song writing.

A passion for music has always been a part of Gerrod’s life. As a young boy, he was raised on a steady diet of the music from The Chili Peppers, Aerosmith, The Stones, Prince, and others from his mum. Raised in the GTA, Gerrod continued to foster his love for music by attending a wide range of concerts and learning the drums. His unapologetic passion for music has no bounds and has spread to a wide variety of styles, whether it be the 90’s rock that sound tracked his teenage years, the jazz he studied in university, or his newfound love for hip-hop. He recently received his bachelors in music and education from York University and is passionate about writing and reviewing good (and less than good) music. Gerrod is also the drummer and songwriter for a Toronto based rock & roll band, One In The Chamber.
RELATED ARTICLES
album reviewsbehind the shadefrank meyer
8.0