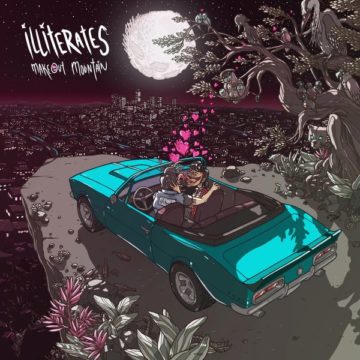 Within the first five seconds of Makeout Mountain, I want and need to be front row center at an illiterates show with a beer in my hand. This isn’t your everyday punk rock album, it’s loud and fierce and not afraid to be different. Makeout Mountain is a cohesive body of work as a whole starting with the stunning artwork. The arrangements and production of some songs like “Owl Commander” capture the raw talent of illiterates. Some punk nowadays can seem forced to fight the man or be hardcore enough, but not illiterates. These guys are not afraid to throw some piano into a punk ballad and make it their own, or blend genres throughout the album. The songs are short and sweet, but have a wealth of depth at further inspection into the lyrics. Several songs on Makeout Mountain could be deemed anyone’s favorites but if I had to pick my top 3 they would have to be; “Ramones City”, “Svengali”, “Mayonnaise Elbow”, and “Blood Bath & Beyonce”. It was such a pleasure to listen to this gem of an album and I look forward to throwing it into my rotation.