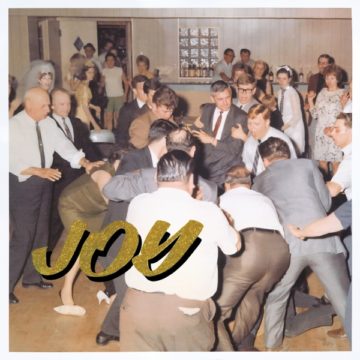 IDLES
Joy As An Act Of Resistance
Partisan Records

2016’s Brutalism was a thundering debut full of urgency and action but what sets 2018’s Joy as an Act of Resistance apart is the more measured, intuitive approach the band have taken. There is no shortage of thunder or urgency, the telltale sign of a band swimming in relevance, but there is also a seemingly carefully plotted control over the both the vocals and the instrumentation such that the message behind the songs – songs about the dangers of traditional masculinity and the dangers of post-Brexit isolationism – always is at the fore.

The album begins with “Colossus”, an aptly-named giant of a song that is dark and brooding, almost to the point of being uncomfortably intense. But there again is the measured approach the band has taken – as a listener you are kept on the very edge of that tension, allowing the message and energy to soak in. The tone of the album changes little over the course of the 12 songs, with the ultimate reward for the listener being the feeling that not only have you experienced something urgent and important, but that experience was shared with the band in a manner that goes far beyond a typical album. Standout tracks are aplenty, especially “Samaritans” and “Great”, but the cohesion of the album as a whole is something that needs to be experienced in its entirety.

At a time when punk seems to be redefining itself amidst its own developing public renaissance (because it has always been vital beyond the mainstream), IDLES are without a doubt the band with their foot most firmly on the accelerator. This album is instantly memorable and may just be the catapult on which the band are launched.

Br. lives in southern Ontario, grew up on The Beatles and The Journeymen, spent his adolescence immersed in grunge, and his adulthood in British alternative. His greatest joy is seeing his son dance and grow into his own appreciation of the indescribable joy of music...
RELATED ARTICLES
album reviewalbum reviewsidles
9.0