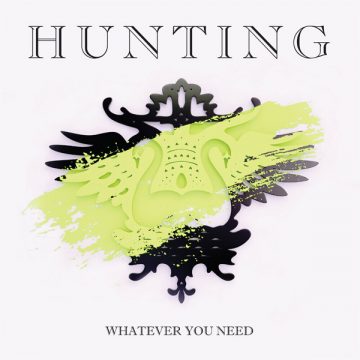 Hunting
Whatever You Need
Nevado Music

Five years ago, Hunting was the solo project of one Bradley Ferguson, putting out wistful, melancholy folk music. In the years since, with the addition of two new band members in Vancouver, vocalist Jessicka and songwriter Dustin Bentall, Hunting has transformed into a trio more firmly anchored in shimmering electro-rock. The wistfulness of previous work has given way to a peppier, more optimistic sound with their most recent album, Whatever You Need, feeling like an auspicious turning point for the band.

From the opening notes of “Scenes from TV Screens” into their cover of Sparklehorse’s “Gold” that follows, and onward through the rest of the album, the gentle guitar melodies and song craft reveal a band that has found something in themselves. A track like “She Was” has clever lyrics and presents a poppier sound before the next track “Black Shirt” shifts the tone to something a little more guitar-heavy at first before settling into another well-structured, catchy song. “Better with Time” was a standout, its gentle guitar creating a dreamy mood, and “Devils & Angels” following it is another catchy track that begs to be sung along to. The best part is that it goes on like this the whole way, presenting a delightful set of songs that never bite off more than they can chew or overstay their welcome.

In the end, Hunting has crafted a tight album here full of catchy, well-structured, well-written, shimmering guitar tracks that I suspect will find a wider audience sooner than later.

Dan Kennard is an English teacher and fiction writer living outside Kansas City, Kansas where he lives with his wife and children. More about his work can be found at amazon.com/author/dankennard. You can also follow him on Twitter and Instagram @kennardistry or contact him at kennardistry@gmail.com.
RELATED ARTICLES
album reviewalbum reviewsnevado music
8.0