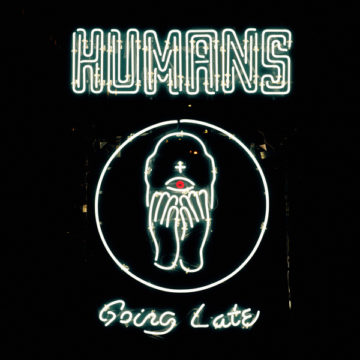 Vancouver-based Humans are an “electropop” (seriously, who comes up with these genre names?) duo made up of Robbie Slade and Peter Ricq. As a genre, EDM is tremendously varied, but Slade and Ricq clearly favour and lean towards the dark end of dance music, with each track based around a solid bass and drum beat that would make anyone want to move. Upon first listen, this album felt pretty standard fare as far as dance music goes, leaning in the direction vocally of Bob Moses, but it definitely grows in quality both as the album progresses and upon further listening.

Though it starts with one of its weakest tracks in “Breakfast With Liz”, a track that feels decidedly uninspired and painfully similar to just about anyone making this style of music, the album shows its real quality with fourth track “Birthday Jam”, from then on immersing itself in a much more thoughtful and brooding darkness. Going Late is layered though in the kind of darkness that fits its style, made for cruising the city or dancing in the clubs over quietly sitting and listening; downtempo it is ultimately not – this is music made for movement, with an obvious aesthetic and atmosphere in mind.

Authentically crafted, Going Late is a solid album that knows its strengths and limitations; it may not be an album to steal the headlines in what has been a very strong year for EDM but it will keep many a listener and club-goer moving this year.

Br. lives in southern Ontario, grew up on The Beatles and The Journeymen, spent his adolescence immersed in grunge, and his adulthood in British alternative. His greatest joy is seeing his son dance and grow into his own appreciation of the indescribable joy of music...
RELATED ARTICLES
album reviewalbum reviewsgoing late
8.0