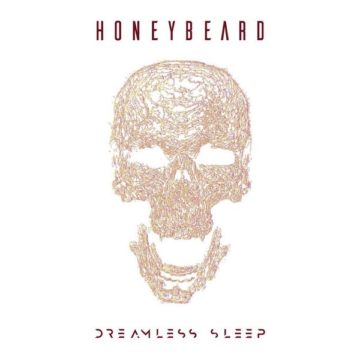 Described as “dark synth-pop at its best,” the album is a moody, synth-pop electronica with smooth hooks, vocals that recall Depeche Mode, and excellence in production. It presents as a strong thematic album, something that is often lost with electronic releases that tend to be very track focused.

Founded in 2014, Honey Beard is comprised expat-Irishman, lyricist Gary J. Conlon (vocals/synth), and Montreal native Tom Bell (guitar/synth), who met in 2008 while playing amateur soccer (football). Their background in rock and alt folk has merged their guitar playing with the production and synthesized keyboard sounds of Honey Beard. The duo has performed around Toronto and Montreal clubs. It’s music that they define as “music that makes you think, feel and dance”.

“It’s the statement we want to make to the world, and it’s not the happiest of statements. It kind of taps into that sort of existential anxiety, the sort of dread, that nihilistic view of life. We try to disguise it with happy sounds and beats, which I think makes for a nice blend” says Conlon. Honey Beard has apparently even won over punk crowds.

The album opens up with tracks that tell a story from a night of debauchery (“Dreamless Sleep” and “Celestial Bodies”), to “Hummingbird” which sings about waking up to feelings of dread and self-loathing. Ah, the joy of a hangover. The synth tracks, full of arpeggiated goodness, encapsulate the spacey, surreal dance floor/club experience that takes you high and can devastate you the next morning. These tracks are grounded by the driving keyboard bass of “This Might Be Something” with thematic higher octave automated flourishes. The album ends on a light, floating track “Momento Mori”. Beautiful from start to finish.

Check them out live April 20, 2017 at Nocturne in Toronto, and April 29, 2017 at M Bar in Montreal or download their album via their website below.

Talia Wooldridge is an avid music lover, composer and ethnomusicologist who contributes artist interviews, live concerts, festivals and album reviews for Spill Magazine. She has written extensively on the intersection of music, personal identity and cultural symbolism with an early focus on Latin American Hip Hop and female Cuban rappers. In her spare time, Talia writes, composes music and manages Music Can Heal, a non-profit that brings live, award-winning musicians to inspire healing in hospitals, hospices and communities in need. Her next project is an interactive music-travelogue exploring music cultures and music travel around the globe. Follow her here: www.taliawooldridge.com + www.movetoyourownbeat.com.
RELATED ARTICLES
album reviewshoney beardnocturne
8.0