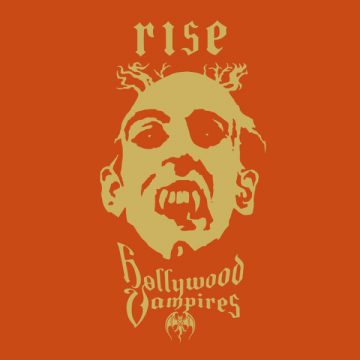 Having released their self-titled debut in 2015, an album predominately made up of covers, save two originals, The Hollywood Vampires, a star-studded supergroup centered around Alice Cooper, Johnny Depp, and Joe Perry, have released their sophomore album, Rise. Unlike its predecessor, Rise is almost entirely original – with the exception of Johnny Thunders’ “You Can’t Put Your Arm Around  A Memory” and David Bowie’s “Heroes” – is an exciting, sixteen track release that, while it may falter at some points,  is a hard-hitting ‘70s throwback that you can’t help but sing along and bang your head to.

Rise opens with a lengthy big rock intro which grows into a flurry of blues riffs before opening up into the verse of “I Want My Now”. As an opener, the track’s build-up is certainly climatic and kicks the record off on a high note as the band embraces a glitzy and gritty sense of darkness that suits them so damn well. It becomes especially clear that Cooper fronts this band perfectly, and Perry and Depp make for an iconic guitar duo with their lead lines seemingly endlessly entwined and layered in the mix as heard throughout the length of the album, but most tastefully and sophisticatedly on the bluesy “Welcome To Bushwhackers”, which also features Jeff Beck.

Unfortunately, while the prospect of 16 tracks sounds exciting, four of them serve brief instrumental interludes between tracks or lengthy extended intros to the following song. Not only does this take away from the bulk of the album, it feels slightly unnecessary. Furthermore, “We Gotta Rise” is beyond cheesy –so much so that it sounds as if it should be used to soundtrack the next Tim Burton animated film – and “People Who Died” feels excessively bloated to the point where the near five minute track should have been cut in half – although, the chorus kicks ass. That being said, there is much gold to be found on Rise. The sinister, swampy shuffle of “The Boogieman Surprise” is absolutely filthy and among my favourite moments across the album. The covers are also great, with Perry giving a weathered and soulful take on “You Can’t Put Your Arms Around A Memory” and Depp bringing justice to “Heroes”. The dark and heavy “Git From Round Me” and “New Threat” are relentless while the slow burning and haunting ballad “Mr. Spider” also stands as a highlight of the album.

Despite its flaws, Rise is a strong album that could have been an instant classic should it have been cut down to its essential tracks. At eight or nine songs, The Hollywood Vampires could have written a new chapter of modern rock; one which is equally steeped in the blues of the ‘70s and the modern hard rock of today. You would be hard pressed to find another band who walk this balance so perfectly and with such a unique stride. While a handful of tracks may detract from the overall punch that Rise packs, it is still a very strong record and I must give credit where credit is due: Cooper, Depp, and Perry are performing at the top of their game and when they’re really hot and in tune with each other, then there is no stopping them.

A passion for music has always been a part of Gerrod’s life. As a young boy, he was raised on a steady diet of the music from The Chili Peppers, Aerosmith, The Stones, Prince, and others from his mum. Raised in the GTA, Gerrod continued to foster his love for music by attending a wide range of concerts and learning the drums. His unapologetic passion for music has no bounds and has spread to a wide variety of styles, whether it be the 90’s rock that sound tracked his teenage years, the jazz he studied in university, or his newfound love for hip-hop. He recently received his bachelors in music and education from York University and is passionate about writing and reviewing good (and less than good) music. Gerrod is also the drummer and songwriter for a Toronto based rock & roll band, One In The Chamber.
RELATED ARTICLES
album reviewalbum reviewsearmusic
7.0