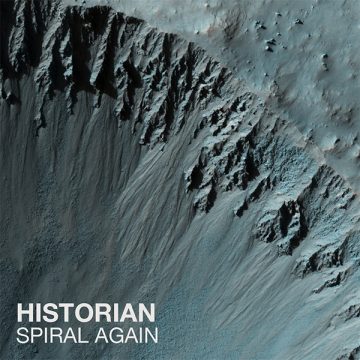 At some point at the beginning of this century (more or less) somebody came up with the term folktronica. It was supposed to designate basically gentle singer/songwriter fare embellished with electronics. A cursory listen to Spiral Again, the fifth release by Los Angeles band Historian might remind listeners of the folktronica term which got lost probably faster than it came up.

But then, Spiral Again is certainly not it. On the surface, its permeating electronics evolve as a slow-moving background and main man over which Chris Karman’s chant-like vocals create an almost dark folk atmosphere, where both the lyrics and the music strive for a mood more than a direct sense out of what is being said.

In most cases like this, it is a very tricky thing to do and artists usually fall flat on their behinds. Not Karman and Historian. What we get is what the album and the title track actually say – a constant spiral of sound, vocals, electronics, and acoustic guitar with Mark Kozelek-like stream of consciousness backed by somebody who has the Brian Eno catalogue in their back pocket.

It seems that usually Historian strives for a more orchestrated sound on its other albums, this being something of Karman’s personal project. The key though is the fact that the 11 tracks here work exactly as Karman intended – as an intimate snapshot of a late-night mood when consciousness constantly shifts into unconscious and back. Quite mesmerizing.

Formerly a lot of things, including a journalist and a translator, currently a freelance writer living in The Netherlands.
RELATED ARTICLES
album reviewalbum reviewshistorian
9.0