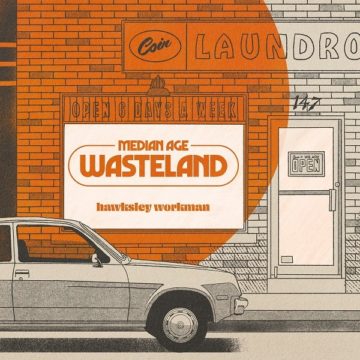 Prolific Canadian singer/songwriter and multi-instrumentalist Hawksley Workman has released his latest album Median Age Wasteland along with a new batch of Spring tour dates across Canada and France.

This album has a very raw sound to it. It is not polished, and frankly, to some, the production may seem underwhelming at first. In many ways though, this is where Workman shines. You find yourself not caring about the lack of bells and whistles as you are charmed by the simplicity of his powerful vocals and the accompanying instrumentation.

Lyrically speaking, Workman has a clear talent for turning seemingly mundane subject matter into beautiful themes. Examples of this include the album opener “Birds in Train Stations” as well as “Skinny Wolf”. In both tunes the human experience is so perfectly told via the stories of the bird and wolf. Indeed, this album is all about Workman telling us his stories, albeit sometimes through these unique characters.

Hawksley Workman is nothing if not eclectic, and Median Age Wasteland is another testament to his vast versatility. Seasoned fans of Workman will no doubt appreciate this return to his more folk/pop driven sounds reminiscent of past albums Treeful of Starling and Between the Beautifuls. This album is an easy listening experience and is recommended to long-time fans and new listeners alike.