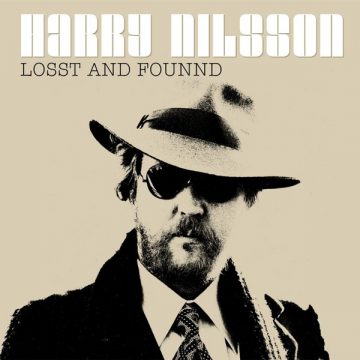 Harry Nilsson left this planet on January 14, 1994, at the age of 52. He had just finished recording an album that was not released at the time for many reasons. Into the vaults it went, where it remained until 2019. Losst And Founnd was, in Harry Nilsson’s mind, his comeback. His last studio album, Flash Harry was released in 1980, with very little fanfare, and so he really was due. However, things don’t always happen the way one plans, and this album sat with producer Mark Hudson who had produced the original album and is responsible for the release in 2019.

Fast forward to 2019, Omnivore is more than a little interested in releasing this lost gem, so Hudson get some friends, including Van Dyke Parks, Jim Keltner, Jimmy Webb, and Harry’s son, Kiefo, to help update and smooth out the tracks. The end result is a very typical Harry Nilsson album. The music ranges from pop to ragtime to full orchestra to straight ahead rock.

Losst And Founnd is full of strong Nilsson melodies combined with heartbreaking and funny lyrics. The last track, for example, “What Does A Woman See In A Man”, is very funny and also clearly autobiographical. You go from giggling to feeling remarkably sad for Nilsson. Here Nilsson uses humour to cover the fact that he just does not see just how wonderful he was.

He is also the master of cover songs. Here he covers Yoko Ono’s. Nilsson turns close friend Yoko Ono’s cold and sparse “Listen, The Snow Is Falling” into a warm celebration. It is a work of art. His voice weaves in and out as he comforts the listener. Ono’s original seemed like a warning, here Nilsson welcomes the quiet and tranquility of snow.

That brings me to the vocals. Of course, by 1994 Nilsson’s voice was not like it was in the early 1970’s. Age, drugs, alcohol, smoking, and far too much partying caught up to him. But, and this is important, for the songs on this collection, his vocals are very strong here. Yes his voice is deeper and does not have the same range, but who cares. It is a treat to hear Nilsson again, with never before heard material. Songs like “Try”, (which tips its hat to “All You Need Is Love”), “Animal Farm” and “Lullabye” (which is exactly what the title says) are incredible moments and remind us all of the huge loss when he passed away at too young of an age.

As with most Harry Nilsson albums, there are a few songs that do not work out as he had hoped. Another cover, “High Heel Sneakers/Rescue Boy Medley”, simply does not work and sounds more like an afterthought. The same can be said for “Yo Dodger Blue”. But even weaker Nilsson songs are welcome in this listening party.

Losst And Founnd is not perfect. It has highs and lows, but it is simply so good to have Nilsson back. In an era where he is now best known as the guy who sings the theme to Russian Doll (the brilliant “Gotta Get Up”), this album is important to remind people that he was a true artist, right up to the very end. He has been missed and this album does a nice job of reminding us all how special and what an absolute genius he was. Losst And Founnd is an album that should be celebrated and enjoyed by the masses.

Born and raised in Whitby, Aaron discovered music through his love of The Beatles. This led to a career in radio, writing for various publications, and ultimately a radio show about The Beatles (Beatles Universe), which ran for over four years. When not immersed in music, Aaron enjoys spending time with the loves of his life -- his wife Andrea, and daughters Emily and Linda (all of whom have an intense love of music too).
RELATED ARTICLES
album reviewalbum reviews