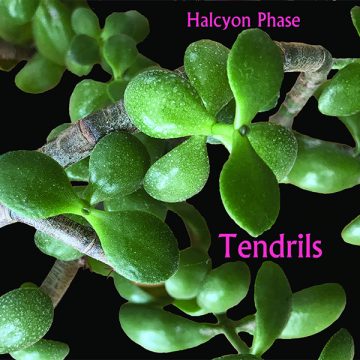 Tendrils is the debut album from Halcyon Phase, a duo consisting of Frank Smith (Sills & Smith) and multi-instrumentalist  Phillip Victor Bova (of Bova sound, and known for his engineering and production work). The two have created an exceptional album that combines rock/psychedelia and Canadiana. It is full of interesting songs, lyrics and intricate melodies.

The two also assembled a remarkable supporting cast to help, such as the incredible Rebecca Campbell providing backing vocals and harmony on several songs. Further,  Peter Beaudoin on drums, James Stephens on violin, and John Fraser Findlay who on guitar and wurlitzer, add a great deal to the songs.  But the core of this project is Smith and Bova, and the two work extremely well together. Smith’s vocals are exceptional, and this project allows him to stretch his vocal cords to provide different styles from his Sills & Smith albums. But as with Sills & Smith, his lyrics are exceptional.

“Storm clouds slowly gathering/The sky is black with rage” sings Smith on the opening track, “Emergency”. This song sets the tone for this somewhat melancholic and brooding album. This is not a bad thing and should not be seen as a criticism. The lyrics and music flow perfectly together and the two are able tap into emotions. Songs of memory, loss, and days past merge into each other and it all fits. One example is the moving “Georgian Bay Cottage”.

Tendrils is a strong album, and it is even more astounding when you consider that it is a debut album for this duo.

Born and raised in Whitby, Aaron discovered music through his love of The Beatles. This led to a career in radio, writing for various publications, and ultimately a radio show about The Beatles (Beatles Universe), which ran for over four years. When not immersed in music, Aaron enjoys spending time with the loves of his life -- his wife Andrea, and daughters Emily and Linda (all of whom have an intense love of music too).
RELATED ARTICLES
album reviewalbum reviewsfrank smith
9.0