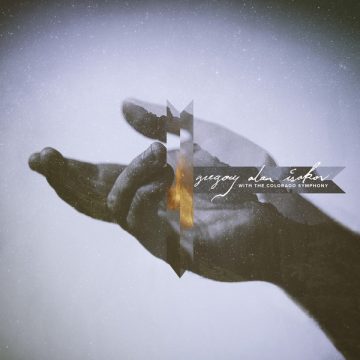 Seldom do artists take compilation records as an opportunity to get creative with their work. After their time on the road with different symphony groups, Gregory Alan Isakov – a South-African born, Colorado-residing indie folk artist – and co. decided that these collaborations deserved a larger stage. That stage comes in the form of Gregory Alan Isakov With The Colorado Symphony, an 11-track compilation of Isakov’s previously simple, yet beautifully arranged, works now reorganized to include elements of the classical soundscape. Threatening his low-tempo magic touch with this risky leap, Isakov maneuvers through some of his more memorable works in an attempt to reinvigorate his acoustic lullabies.

These horns and strings and images of a conductor swiftly throwing his arms over a sea of instruments and their players are all still framed behind Isakov, who is a poignant picture of musical confidence when absorbed in tracks he is most familiar with. The record strikes chords that may never be plucked by his guitars or banjos, yet those moments are committed to the framework of the artist at their core and would undoubtedly be lofty if not handled by a firmer grip. This is why this collaboration benefits heavily from retreading over past material. It is perhaps the most justified reason for rereleasing previous work. Though it is difficult to tell how this will fare with those who are unfamiliar with Iskaov’s repertoire, there is an overwhelming sense that this record was intended for familiar ears. In that notion, this symphony collaboration is fan service of the highest order. Many begging for new material will likely be silenced by these refreshed arrangements, which invite deeper exploration regardless of how well versed you may be in their original counterparts.

Lulls of certain songs contribute to less of a drone than they did upon original fitting. “If I Go, I’m Goin’” seems reborn with this new opportunity, lyrically shining brighter than it did the first go round. Here, Isakov coasts over violins, singing, “these photographs, know I’m a liar. They just laugh, as I burn her down.” Others that fare far better from the backing symphony include the famous “Big Black Car,” whose inferiority-complex lyrics are less spun with longing as they now flutter with tones of bittersweet, unrequited love. Then there’s “Amsterdam,” whose horn section turns its usual climax into valiant, goosebump-inducing audio, smashed powerfully by the bellowing “Churches and trains! They all look the same to me now.” Even older tracks “The Stable Song” and “That Sea, The Gambler” are enlightened despite their original mid-Western twang. The latter of the two is arguably the strongest track here. Whatever the form may be, the symphony manages to act as a staple between these 11 songs, spanning

10 years of variance in Isakov’s career, swiftly encapsulating a decade into a whole.

Still, the symphony might as well be a studio device in all of this. The stable center of the piece is truly Isakov. When he croons, “I sold all this land to buy me some dreams” on “Liars,” it’s clear that his creativity has yielded a far better crop than any lot he may have possessed prior. How fortunate we are to reap the benefits.

Robert Defina is an avid critic both on paper and in person. He spends more time writing album reviews than he does worrying about his future. He hopes that this sort of procrastination never grows old.
RELATED ARTICLES
amsterdamgregory alan isakovliars
7.0