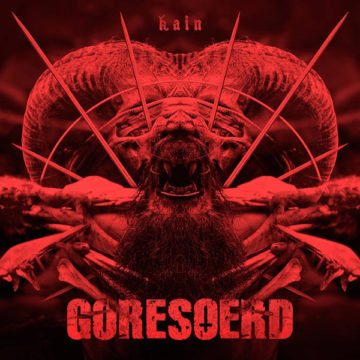 Goresoerd is a death metal band from Estonia that formed in 2004. In a short span of time, they became known for its onstage energy and hilarious songs. Their most recent album, Kain, is inspired by the Bible’s tale of Cain, legend’s first murderer, and it is fast, heavy, and evil.

This album sounds pretty similar to Slayer’s God Hates Us All in terms of pace and heaviness. The first riff on the first song, “Vaid Uks Padrun”, is an introduction to what Kain is, a fast-paced head-banging album.

Title track “Kain” shows us a bit of melodic death metal which even includes a mix of operatic voices and guttural ones, and a really well-constructed drum piece. But probably the best track on the album is “Metsaline”, here the guitars are incredible, the change of rhythm in the middle of the song is gorgeous, and the introduction of the guitar pre-solo lets you know something great is going to happen next.

“Niiske Muld” is another killer with probably the best guitar solo on the entire album, here the double bass drum never stops and the guitar seems to be singing about the apocalypse.

Although the energy and composition are great, there are sections in which the tracks sound pretty similar to each other. Kain is a very consistent and well-produced piece of death metal.

Sebastian Mahecha is a postgraduate journalism student at Humber College. I’m passionate about music, I enjoy listening to mostly any kind of music, from thrash metal to most underground salsa. Politics and social justice have been of my interest for many years, so whenever a new musician records a song about controversial topics I’ll be there to take a look.
RELATED ARTICLES
album reviewalbum reviews
9.0