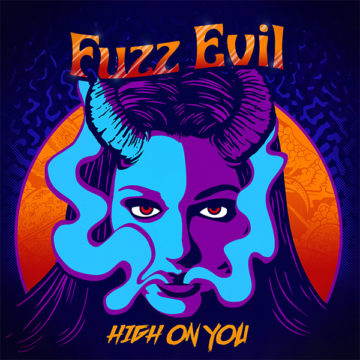 Fuzz Evil
High On You
Independent

Arizona stoner, desert psych-rock band Fuzz Evil has returned with their sophomore album, High On You. As a followup to their 2016 self-titled debut, the power trio aren’t messing around as the album was recorded in none other than Studio 606 – yes, Dave Grohl’s Los Angeles studio – under the production of Paul Fig (Alice In Chains, Slipknot, Ghost). As a result, High On You is a modern sludge rock odyssey that travels between a wide range of obvious influences, including Soundgarden, Queens Of The Stone Age, and Black Sabbath.

Opening with the crunching riffs of “Get It Together”, Fuzz Evil seamlessly blend ambient psychedelia with grungy hard rock in a song that builds from a wide open verse to a hard-hitting chorus where lead vocalist, Wayne Rudell, soars like a young Chris Cornell – circa Louder Than Love, 1989 – over a chaotic instrumental section. “You Can Take Her Away” follows in a similar fashion while also featuring a fiery instrumental breakdown towards the end.

Things get incredibly heavy on “Ribbons And Kills” a track that is driven by thick distorted guitars while balancing light spacy vocals in a manner that feels reminiscent of both Black Sabbath and Deftones. While there isn’t a bad song on High On You, “The Strut” stands out for its uptempo pace; however, “Are You In Or Out”, the album’s closing track, may take the top spot with its push-and-pull 6/8 pulse, larger than life drums, and an ominous wave of guitars.

All in all, High On You is a solid sophomore release that allows for the band to continue to explore the sonic space and experiment with both expectations of the modern desert stoner rock genre along with that of a rich history of influences. Don’t let the genre labels fool you, High On You is as related to Kyuss as it does of early hard rock and metal of the ‘70s as well as grunge of the ‘90s. While at times this may feel slightly incoherent, Fuzz Evil prove to be ambitious in their experimental nature and even at times innovative in their delivery that will leave fans more than excited for what is to come from the band in the future.