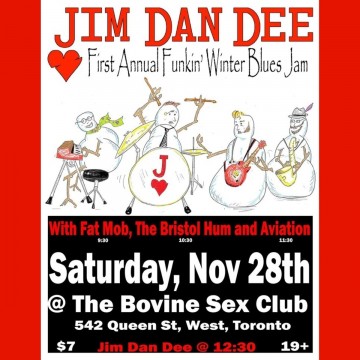 Jim Dan Dee is hosting the First Annual Funkin’ Winter Blues Fest. This is going to be a kick ass show!

Come see the best of what the new blues scene has to offer. You will get some rock, some funk and a some kick ass blues. Strap on your dancing shoes, prime up your liver and get ready to PARTY!

The music of Chris Reed’s Fat Mob uses predictable feel good chord progressions splashed with rock, blues, country, funkadelia and jazz. This music comes complete with a pocket groove that will challenge anyone bent on standing still. The dilated vocals that Chris Reed delivers with his swampy, gritty guitar tone seduces the audience while he sings of violent ex. girlfriends, date rape, high school fights, drug addiction and psychological struggle. If there is one word to describe their music it would be……fun!

The Spill Magazine is a Toronto-based online publication dedicated to covering the independent music scene with a strong focus on our thriving hometown talent. Our writers bring you up-to-date news, in-depth features on musicians and reviews for the latest CD releases. We also travel to the front lines for all local festivals including Canadian Music Week and North by Northeast. Don’t forget to check out our Facebook and Twitter pages for all daily Spill updates.
RELATED ARTICLES
bovine sex clubeventsfat mob