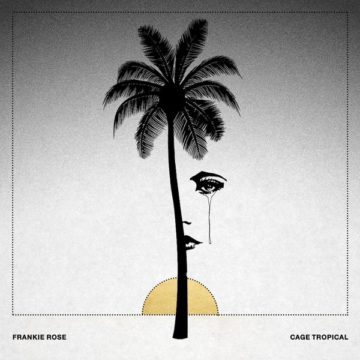 What do Dum Dum Girls, Crystal Stilts, and Beverly all have in common? Each one of them played host to the talented drummer/vocalist Frankie Rose, before she struck out on her own as a solo artist in 2009. Since the release of her past albums Interstellar in 2012 and  Herein Wild in 2016, Rose has been hard at work forming the Indie Pop triumph that is Cage Tropical. The road to her third album was one that was unpaved, in fact, the singer calls it her “redemption record” because of the difficulties involved in its creation. The album was created in both LA and Brooklyn, in the midst of personal struggles and unearthing the sound that Rose wanted to hear from herself. This record is proof that (as your parents told you) hard work pays off. In Cage Tropical, Rose has managed to create an album that pulls the listener in from the first synth charged note.

Although the creation of the album was started on one end of the country and finished in another, the ten tracks on Cage Tropical flow from the end of one song to the start of another with incredible unity. Still, some tracks stand out as showcases of the talent Frankie possesses. “Love in Rockets”, the leading song on the album, rushes in and grabs you, Rose’s angel-esque voice coming from all angles. There is something about “Love in Rockets” that is immersive (especially when you listen with some good quality headphones) It is intense, but not in the abrasive way of the first track “You for Me”, on Rose’s 2016 album Herein Wild. It is retro, but not in a way that’s too nostalgic. Instead, “Love in Rockets” gracefully picks up the listener with its melody, and doesn’t let them down until the last note. Another song that doesn’t disappoint is the album’s title track, “Cage Tropical”. Rose crafts a track filled with funk. “Cage Tropical” is chock full of layered vocals with a mystic tone. Everything about this one is harmonious, and it possesses the ability to make the listener feel as though they are on an alien planet.

After two past albums from Frankie that were musically strong, yet incredibly similar, Cage Tropical breathes new life into a formula of new wave inspired music that works magic for her. Although there are songs of Cage Tropical that stand out, nothing about Frankie Rose’s third studio album is disappointing. With every new track she hits the nail on the head again and again as she makes an impassioned playlist that reflects sounds as futuristic as it does old school. You’re going to remember this album.

The Spill Magazine is a Toronto-based online publication dedicated to covering the independent music scene with a strong focus on our thriving hometown talent. Our writers bring you up-to-date news, in-depth features on musicians and reviews for the latest CD releases. We also travel to the front lines for all local festivals including Canadian Music Week and North by Northeast. Don’t forget to check out our Facebook and Twitter pages for all daily Spill updates.
RELATED ARTICLES
album reviewsfrankie roseslumberland records
8.0