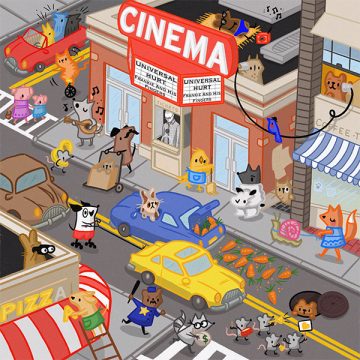 Punk rock band Frankie & His Fingers has made a full comeback with its most recent studio effort, Universal Hurt. This album hearkens back to the days of mainstream punk bands dominating the charts in the early 2000s.

Its sometimes-melancholy lyrics are in stark contrast to its colorful cover art and cheerful production, which are more well-suited for sunny days alongside the beach but add to the aesthetic. Closing track, “There’s A Dragon In That Cave”, is perhaps the standout here. At a staggering nine minutes, it is a synth-rock ride that manages to do something that a song of its length seems to rarely accomplish: stay interesting.

The sound quality is a bit lacking, leaving many of the best songs sounding a bit weak and muddled as though the song is echoing from an empty room.

Overall, Universal Hurt is an intimate album that uses its sunny and colorful aesthetic as a contrast. While it isn’t very groundbreaking, nor will it attract new fans to the genre, it is a worthy comeback for the band.

D.L. Smith-Lee is a writer and music lover based in Chicago. He has fiction published in multiple venues and is a graduate of DePaul University. He is currently an MFA candidate at Chicago State University.
RELATED ARTICLES
album reviewalbum reviews
8.0