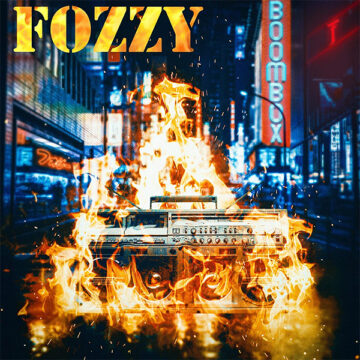 The Georgia-based band Fozzy have returned after five years with their eighth studio album, Boombox. The follow-up to 2017’s Judas, it’s full of the usual energy and effort that the band puts into their music. With a solid mix of old school rock ‘n’ roll and pop, Fozzy attracts more than one listening audience.

In 2019, the first single “Nowhere to Run” was released. Loaded with guitar riffs, it’s catchy and the phrase ‘nowhere to run’ is a bit repetitive but it works together to make a great song. “Sane”, the album’s opener, was the second single to be released. At first you hear the old vinyl record scratching that moves into a little bit of electronics. It’s trying to be a rock ‘n’ roll song, but it almost feels on the edge between rock and pop, until Chris is yelling “SANE!” and for a moment it feels bad ass.

Every rock album has to have a power ballad, right? “Army Of One” is a slow, chill song that is easily relatable. Everyone is going through some battle that they are fighting for, and everyone wants to save the world.

Then there’s the cover of Frankie Goes to Hollywood’s “Relax”. It’s definitely a song you wouldn’t expect to hear on a rock album, it’s a decent cover even though Fozzy didn’t change it up much.

“Vulture Club” is the banger you’ve been waiting for through the album. A song about those who prey on other people’s weaknesses and vulnerabilities. The song is pretty heavy with great guitar riffs and pounding drums and Rich Ward’s added harsh growly vocals just make it a great ending to this album.

Melinda is a music enthusiast from the US who grew up on vinyl in the 70s and 80s. She's a lover of all genres, but rock/metal runs through her veins. Music is always in the background and in her head. Unfortunately, she has to have a "regular 8-5" job since "Professional Concert Go-er" doesn't pay the bills. Her bliss would be to follow more musicians and bands than "People she may know" on social media. Her ultimate long term goal is to be the old lady just enjoying the show down in front at the barricades at live shows. Her favorite quote is "Where words fail, music speaks".
RELATED ARTICLES
album reviewalbum reviewsfozzy
8.0