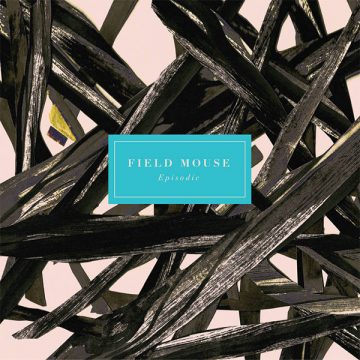 Field Mouse will be showcasing their first full-length album – Episodic, written as a five-piece band on their North American tour that begins August 4th in Philadelphia and ends October 12th in Ferndale. The band will first headline in their hometowns Philadelphia and Brooklyn before joining Cymbals Eat Guitars. The majority of Field Mouse’s tour will be supporting Cymbals Eat Guitars, an indie rock band originally from Staten Island, NY.  Episodic, a guitar-pop-rock-heavy 10 track album was recorded at The Headroom Philadelphia with Hop Along’s Joe Reinhart, and written over the course of one year.

Made up of five members, Field Mouse is composed of Rachel Browne (vocals/guitar), Andrew Futral (guitar), Saysha Heinzman (bass), Tim McCoy (drums), Zoë Browne (synth/rhodes/vocals). Back in 2014, when the album Hold Still Life was released, Field Mouse was led by the founding members Rachel Browne and Andrew Futral, who recorded all of their tracks themselves. Episodic represents a new era in Field Mouse’s musical journey – “the letting go; the abandonment of past persuasions for something altogether more untamed.”

The angsty youngsters really rock out and let loose in this album. There are some tunes, however, where the lyrics seem to be an odd fit at places, such as sections in the song Accessory. The album has its strength, particularly in demonstrating a youthful exuberance. But it misses a certain charm and flow in songwriting that more experienced bands portray. At times, there is a vague sensation of a lack of instrumental synchronization. Overall, Episodic proves Field Mouse’s ability to switch between various moods and tones, something that does not come easily in a full album.

Originally from Toronto, Giselle is exploring the worlds of entertainment and social change through a musician's lens. With a background in Environmental Studies and Music Business, she works to establish her own voice in the music scene.
RELATED ARTICLES
album reviewtopshelf records
8.0