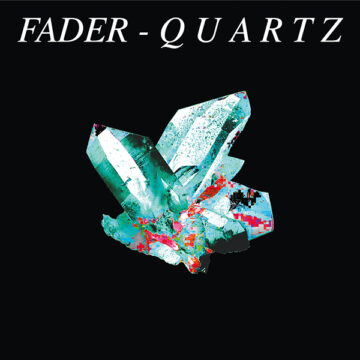 Fader is a duo, consisting of Neil Arthur (Blancmange/Near Future) and Benge (Wrangler, Creep Show and John Foxx And The Maths). Quartz is their third album, following 2019’s brilliant In Shadow.  Benge also assists Arthur with Blancmange, but what needs to be made clear is that this is not a Blancmange album. In fact it is very different from Blancmange in many respects. Of course, Arthur’s voice is a dead giveaway, but musically and structurally, Fader has their own distinct sound. Although it is electronic-based, Fader is much more experimental and a bit on the rougher side. The songs have a somewhat raw energy to them.

An example of this raw energy is the title track, “Quartz”. It opens with a melodic synth/piano melody, but once Arthur’s distorted vocals make an appearance the tone and melody of the song instantly shift. Not exactly anger, but the beautiful melody introducing the song gets mixed into the overall confusion and almost panic of the song. “Those who attempt, though they try hard, comment ‘there’s nothing here, nothing to hear’” sings Arthur. It brings the song to an end and the overall effect of the layered sounds, music, and lyrics is like an audio version of The Twilight Zone. And it is brilliant.

Elsewhere the album is moody, slow-paced, and very sparse. The album opens with the very spacious “Serpentine” which builds with intensity but Benge and Arthur never tip it over the edge. The album ends on a similar note with the wonderful “Poison”. And in between Arthur and Benge build and layer sounds to create not only their own music but in many respects their own world.

Quartz is a huge step for Fader. Perhaps Fader was once seen as a side project for both Benge and Arthur. However, with Quartz they are proving that as a band, they are a force to be reckoned with and to be seen as a serious band/project that produces incredibly strong albums.

Born and raised in Whitby, Aaron discovered music through his love of The Beatles. This led to a career in radio, writing for various publications, and ultimately a radio show about The Beatles (Beatles Universe), which ran for over four years. When not immersed in music, Aaron enjoys spending time with the loves of his life -- his wife Andrea, and daughters Emily and Linda (all of whom have an intense love of music too).
RELATED ARTICLES
album reviewalbum reviewsbenge
9.0