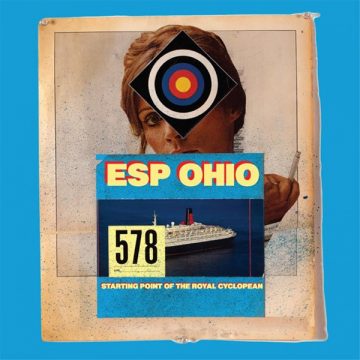 ESP Ohio’s Starting Point of the Royal Cyclopean has that old-school Rock sound combined with a few Pop or Prog-Rock undertones. It’s a noisy, gritty, and raw album that is pretty light in sound but can get a bit dark at times. It may take a few listen-throughs to get used to, since it does take some time to grow on listeners, but t’s overall a pretty solid collection of songs.

This band is another project from singer Robert Pollard of Guided by Voices. He’s brought on the familiar names of Doug Gillard, Mark Shue and Travis Harrison.  Together, they have put together a variety of songs that are unique in their own ways.

As mentioned before, it does take a few playthroughs to understand the quality in the album. There are elements, like the use of some sort of horn or windpipe in “The Great One” that mirrors the guitar; the nostalgic and deep sound of the chorus in “Grand Beach Finale”; and the dark spacy vibe in “The Earthman,” to emphasize the narrative of the track.

“A Much Needed Shot in the Arm” really sticks out because of how easy it is to relate to. It talks about how sometimes that’s all you really need to get going; just a shot in the arm to feel better about a particular situation or circumstance. It opens with some strong guitar strumming and is catchy enough to get stuck in anyone’s head and serves as a good hook to get the listener interested from the start.

The imperial march in “Royal Cyclopean” is a nice touch to throw into this particular tune, especially with the use of the single trumpet. It works well with the mismatch lyrics sung in short prose and the solemner chorus against the proud march.

While it’s definitely got some high points and a few catchy songs that may grow on the audience, Starting Point of the Royal Cyclopean isn’t necessarily a life changer, but considering what it has to offer, it is well worth the listen.

Music and writing have always been a big part of Sabrina's life. She would "borrow" her dad's rock and metal CDs from his collection and listen to them while going through the art books. Although she doesn't write angsty poetry anymore, she does have a Bachelor's Degree in Journalism which she uses to pursue a creative career path. When she's not writing, Sabrina can be found juggling a coffee cup and DSLR or Instagramming her food.
RELATED ARTICLES
album reviewsrockathon records
8.0