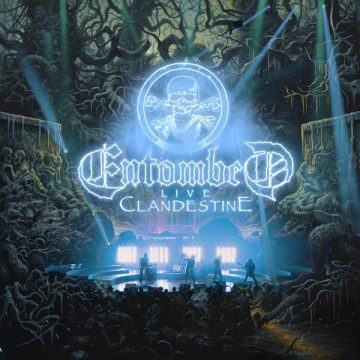 As a part of the celebration for the album’s 25th anniversary, Swedish Music Hall of Fame inductee Entombed re-released their second studio album Clandestine, featuring original band members Nicke Andersson, UffeCederlund and Alex Hellid playing the album in full, live. First released in 1991, Clandestine is an album that is nothing less than quintessential, having ushered in the distinguished sound of Swedish death metal that has been inspiring bands within the genre for decades.

The event for the 25th anniversary where the Clandestine Live performance recording took place also featured the Malmö Symphony Orchestra and Choir performing Clandestine from the opening “Living Dead” to closing “Through The Collonades”, arranged for orchestra by Thomas Von Wachenfeldt (WACHENFELDT), with the original members from Entombed sitting in as part of the ensemble. Entombed then played Clandestine in full post-orchestra performance.

Having seen Entombed live a few times before, the live recording perfectly represents the sound of an album that has set the bar in death metal for many years, truly encompassing the band’s sound and rightfully honoring classic Swedish death metal. This album should most definitely take a place in any fan’s collection.

Notably, hearing “Stranger Aeons” again live with the original members is truly a unique experience, especially for fans who couldn’t make it to the original event in Sweden a couple years back. The live version is unquestionably worth a listen for this outstanding, classic album of the ages.

Raised on Don McLean and Zeppelin, Molly knew every word to “American Pie” before she could walk. A natural born writer and musician, Molly has worked in and out of the entertainment industry for almost a decade, from singing Italian opera to having managed an award-winning heavy metal radio station, and now working as a publicist for world changing companies around the globe. Molly graduated from Seton Hall University with a B.A. in Public Relations and currently lives in Jersey City with her lifelong sister soldier and her bug defeating cat Clementine.
RELATED ARTICLES
album reviewalbum reviews
7.0