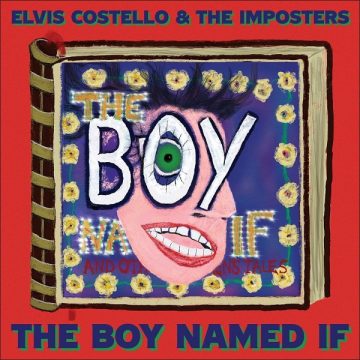 “I’ve got my reputation to think about – I’ve got three, four, five songs to write before midnight…”

This quote is fiction, but the words were actually uttered by Elvis Costello, playing himself in the HBO television series Treme. Though humour was the intent of the line, there lies a kernel of truth behind the comic cliché. In keeping with his prolific ways, Costello has just released his 32nd album, The Boy Named If.

Just when you think you’ve heard Costello’s best, he rolls out a simply wonderful record like this one. Having bounced back strong from an earlier bout with cancer, 2022 finds the artist at the top of his game.

Listeners who have followed Elvis Costello’s career over the years will hear some familiar sounds and musical turns of phrase. To these ears, it represents some of the artist’s best work, this side of his glory days with The Attractions. The phrase “all killer, no filler” may sound trite, but it honestly applies here. There is nary a weak track in the bunch.

The proceedings start strong with the leadoff “Farewell, OK”, a song that throws first-wave Elvis into a blender with the Merseybeat sound and a bit of classic American R&B. It is the kind of pastiche that fans have come to expect. Costello follows suit throughout this stylistically diverse album, painting the characters in his songs with fine detail, applying nuanced performances as the song dictates.

There are many high points here, but the wonky cabaret sing-along of “The Man You Love To Hate”, and “The Death Of Magic Thinking” (with its bombastic, big stupid guitar) merit special mention. Additionally, “Trick Out The Truth” is darkly sweet and fun, landing somewhere between Costello’s 1989 song “God’s Comic” and the classic children’s tune “The Teddy Bears’ Picnic”. Singer-songwriter Nicole Atkins is also an excellent addition to this release, sharing the vocal on “My Most Beautiful Mistake”.

Costello’s band, The Imposters, is in top form on this album. Stalwart Attractions-turned-Imposters Steve Nieve and Pete Thomas turn in creative and solid performances on keys and drums (respectively), and bassist Davey Faragher demonstrates some of his best playing on record.

It is probably no surprise, especially at this point in his career, that Costello touches on styles and sounds from his past. There are plenty of musical callbacks and self-influences present on this album, but none of it seems hackneyed. Rather, it is all very fresh, and full of assertive, positive energy – a great album that is worthy of multiple spins.

Bryan Williston has been involved in music since he was a young child. A veteran singer, songwriter, and music educator, Bryan has enjoyed playing a multitude of musical genres in a variety of outfits, over the years. Bryan lives in Whitby, Ontario.
RELATED ARTICLES
album reviewalbum reviewselvis costello
9.0