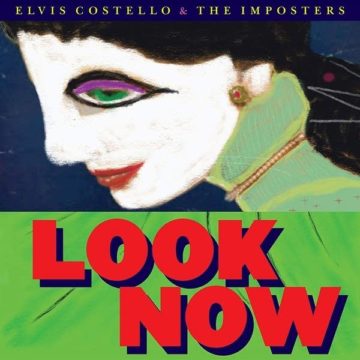 Following the inspiring 2017 Imperial Bedroom tour, Elvis Costello along with his Imposters reach back to his 1982 classic for inspiration.

Look Now, Costello’s first release since his collaboration with the Roots, Wise Up Ghost, sees him return to the baroque pop format that made Imperial Bedroom so incredible. Never one to intentionally repeat himself or revisit old territories, this release comes as a delightful shock.

Dusty Springfield should also be credited both for inspiring a laid back soul vibe to the record as well as the female narrative that is present throughout the album. “Unwanted Number” tells the story through the point of an abandoned teenaged girl dealing with an unplanned pregnancy, while “Burnt Sugar is So Bitter” is about a woman moving on with her life after her husband takes off. The latter could be seen as a sequel to Imperial track, “The Long Honeymoon” which describes the frantic thoughts of a wife while she realizes her husband is cheating on her with her best friend.

With the blend of both baroque and R&B, Look Now seems to be the missing link between Imperial Bedroom and its often overlooked followup, Punch the Clock.

Burt Bacharach lends his keyboarding genius to “Don’t Look Now” and “Photographs Don’t Lie”, the latter, a lounge-tinted track that reeks of merlot and cigar smoke. Costello now playing the befitting part of learned crooner, rather than his angry young self.

The album title hinting at his most recent battle with cancer, Costello urges us to focus on his career with a fresh perspective. It’s no coincidence that he chose to begin his LP with “Under Lime”, a track about an aging singer who is now out of fashion.

While it doesn’t have the immediacy of This Year’s Model or Get Happy!!, Look Now is a latter day masterpiece in its own right. It’s no question that this is his best title since 2004’s The Delivery Man. From the ‘60s girl-group inspiration to the lush chamber pop orchestration, Elvis Costello has another brilliant mistake on his hands.

As a child growing up in the suburbs, Ryan found music as a way to soothe his boredom. After first hearing AC/DC at the age of 10, he was hooked on music. Tracing its roots to the ‘50s, he became obsessed with Elvis, Buddy Holly and Chuck Berry. Somehow that led to grunge, then psych-rock, then jazz, etc. The list goes on and on and his collection of vinyl records continues to grow.
RELATED ARTICLES
album reviewalbum reviewsconcord records
8.0