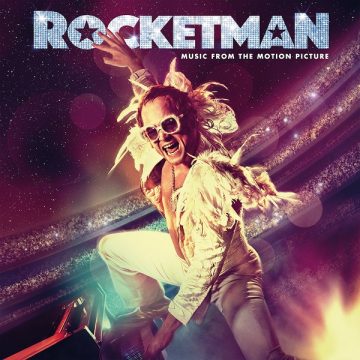 Music biopics are a tricky concept; the idea of celebrating an artist’s vast legacy is an exciting feat for music fans and film buffs alike, but what happens when the film’s subject is an artist with one of the most dazzling legacies of the past century? Elton John is being honored in Rocketman, directed by Dexter Fletcher, which showcases Elton John’s compelling biographical story. Of course, Elton John’s story is worthy enough of the film treatment, but what about the most important component of his career: his discography which currently contains 30 studio albums?

The answer is being gifted with a beautiful original soundtrack featuring 22 tracks spanning through John’s career, from the hits, (“Tiny Dancer,”) to more fan-favourite obscure nuggets, (“Sorry Seems To Be The Hardest Word”). The presence of movie magic is prominently featured on the soundtrack courtesy of the vocal stylings of Taron Egerton, who portrays Elton John in the film. Purists of his music needn’t worry; Egerton’s voice is nearly identical and difficult to discern from Elton John’s actual voice at times. I dare you to listen to the intro to “Border Song” and persuade your ears not to do a double-take!

Elton John’s beloved upbeat and charismatic stage performance is preserved in the adaptations of “Crocodile Rock” and “Honky Cat”, and the goosebump-inducing nature of Elton John’s ballads is present in cuts like “Tiny Dancer” and “Don’t Let The Sun Go Down On Me.”

Rocketman (Music From The Motion Picture) is bound to please every type of Elton John fan.

Taylor Hodgkins is a freelance popular culture writer based in Music City, USA who spends her time writing love letters + tributes to her favorite pop culture of yesteryear. When she isn't writing, you can find Taylor listening to 80's college rock and petting her cats. She's probably eating a baked potato, too.
RELATED ARTICLES
album reviewalbum reviewselton john
8.0