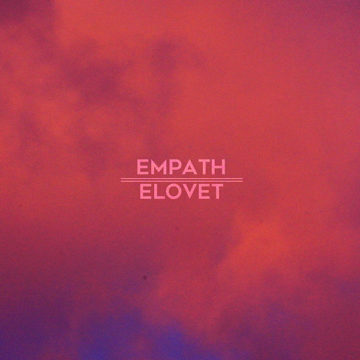 Elovet is one person, Aljournal Franklin II, a young and talented artist. Empath is his third full-length album. His last album, Rift, was released almost a year ago, and since then he has issued a single. But Empath also shows how much Elovet has grown in a very short time.

Empath is a much more confident album, full of layered sounds and music while respecting the silence between the sounds. Elovet also makes excellent use of the spoken word. The mini-interviews and talk between some of the tracks are not only riveting; they need to be there. He uses everything to join the songs, music and sounds together to shape a brilliant, cohesive album.

This is not a concept album, but it is an album with themes. Elovet takes a deep, close look at relationships, emotions and time throughout Empath. He does this with lyrics, of course, but also recurring sounds. Listen to “Waiting Room” (the first single issued from the album) and “March.” You will hear similar sounds throughout both songs, which act as a joining force.

He is also not afraid of found sounds: the sound a computer makes booting up, bangs, voices, all add up to music to Elovet. He uses each sound as an instrument and it works. On top of all of this in a soundscape are some very convincing and strong vocals from Elovet. In many ways, he has found his voice on this record. Not only are his vocals powerful, they are also packed with emotion. You may not be able to understand every word, but you will understand the sentiment as you listen. Listen to the song “Cave” and his use of voices, but pay attention to his lead vocals. Chilling and welcoming at the same time, which is quite an accomplishment.

He also not afraid to play with vocals. On “Rather,” he speaks to a person, “Where would I be without you?” he asks. “Where would you be without me?” he replies to his own question. This over altered singing and some brilliant instrumentation, “Rather” is one of several highlights on the album.

The only problem with Empath is the inability to describe it. It is urban without being urban; it is many different genres rolled up into one, but the best way to describe the album (and his sound) is that he creates soundscapes. The use of drum machines and loops behind deceivingly simple melodies all come to mind. He is not afraid to use older instruments, so long as he achieves the sound he is looking for, or at least the sound he hears. Again, listen to “Hold On (Dys_Funtion Reprise).” There are some seriously old keyboards being used, and yet the song does not sound the least bit retro. It is art.

Perhaps that is the best way to describe Empath. It is art. This is not an album you want to put on during a party, but rather an album to sit down to, darken the room, put on headphones, and dig the sounds. Also, Empath has a brilliant ending. Just keep listening.

That is the message: Just keep listening to Elovet. This is an artist to watch. He has accomplished a great deal in a short time, and it is clear that greater things are going to come. In the meantime, Empath is an incredible album, full of songs, sounds and silence to keep you listening.

Born and raised in Whitby, Aaron discovered music through his love of The Beatles. This led to a career in radio, writing for various publications, and ultimately a radio show about The Beatles (Beatles Universe), which ran for over four years. When not immersed in music, Aaron enjoys spending time with the loves of his life -- his wife Andrea, and daughters Emily and Linda (all of whom have an intense love of music too).
RELATED ARTICLES
album reviewsaljournal franklin iielovet
7.0