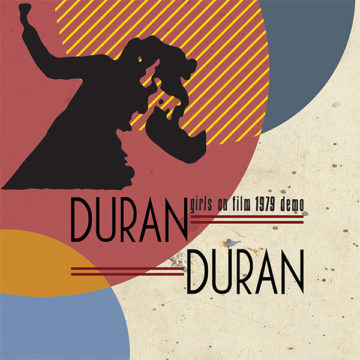 These previously-unreleased raw demo recordings include the original versions of “Girls on Film” and “See Me Repeat Me” (which would become megahit “Rio”) — along with “Reincarnation” and “Working the Steel.” It is a rare piece of auditory history for Duran Duran fans, or fans of early pop signings. Plus, the LP cover outlines Wickett’s inspiration for the songs and the evolution of the band.

‘It is important for people to understand the true origins of the song “Girls on Film” and to hear the edgy sound that Duran Duran had in the beginning,’ says Wickett. ‘This song was inspired by the dark side of the glitz and glamour, where these perfect idols suffered tragedy and addiction. The film Sunset Boulevard was also a big influence with its tale of a fading movie star.’

The warped pan opening of “See Me Repeat Me” opens the demo. It jumps to fullness when Wickett starts singing, signaling the addition of another recording track being switched on. The demo builds steadily with cool rolling drum and synthesizer licks in “Reincarnation” before climbing to “Girls on Film.” Unfortunately, “Working the Steel” lost the demo’s momentum for me. They were smart to put it at the end.

Wickett’s vocal style on “Girls on Film” is a stark departure from the smoothed-over singing that the pop song would eventually re-record. Plus the harmonica is gold. Once your ears readjust to the scratchy and looser vocal style, Wickett’s gritty take of such a well-loved song is refreshing amidst the monotonous auto-tuned songs of today. Initially, the rawness of the demo, along with the seeming desafinado singing of “Working the Steel” made me question how EMI actually signed them. Given the UK punk and pop scene, Duran Duran Girls on Film 1979 Demo EP definitely falls in line with the music aesthetic of the day. By the fourth take, I was hooked on the first three songs.

After Wickett left the band, he went on to produce videos for and co-write albums with Nusrat Fateh Ali Khan, Malkit Singh, Stereo Nation, Taz, and DCS. He has also supported The Clash, U2, Culture Club, Burning Spear, and Orange Juice, in addition to opening on UK tours with Duran Duran and Gregory Isaacs.

The Girls on Film 1979 Demo EP is available digitally and on CD, as well as on stunning red and clear-colored vinyl HERE.

Talia Wooldridge is an avid music lover, composer and ethnomusicologist who contributes artist interviews, live concerts, festivals and album reviews for Spill Magazine. She has written extensively on the intersection of music, personal identity and cultural symbolism with an early focus on Latin American Hip Hop and female Cuban rappers. In her spare time, Talia writes, composes music and manages Music Can Heal, a non-profit that brings live, award-winning musicians to inspire healing in hospitals, hospices and communities in need. Her next project is an interactive music-travelogue exploring music cultures and music travel around the globe. Follow her here: www.taliawooldridge.com + www.movetoyourownbeat.com.
RELATED ARTICLES
album reviewscleopatra recordsduran duran
8.0