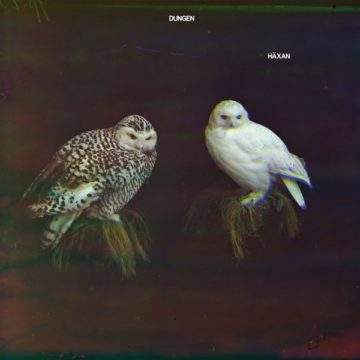 Sweden’s psychedelic rockers, Dungen, are known for their insane live performances and distinct sound. Their latest work, Häxan, is an instrumental album that doubles as a narrative accompaniment to Lotte Reiniger’s 1926 animated masterpiece “The Adventures of Achmed”.   Along with this release, the band just finished a small US tour where they live scored the film with the music of Häxan. The indie rock quartet and their label, Mexican Summer, have teamed up to bring fans something unique and exciting. The album is intense, moody, evocative, and of course, cinematic.  With its visual accompaniment it is a beautiful and transformative experience.

Without knowing too much about the film the song, “Jakten genom skogen” sets the tone of a mythological and epic adventure.  This makes sense when you learn that this title translates to “hunt through the woods’, and that a few of the main characters are a sorcerer, a witch, and a flying horse. The tune has a definite jazz influence — driving forward with a pushy bass and drum groove, while sitting back with otherworldly synths. The sleepy interludes of “Grattan” and “Aladdin’s flykt over havet” offer a thoughtful prose of fascination and affection. While the album’s title track, “Haxan,” boasts a playful distorted guitar lead and rhythm section support that depicts something between Pink Floyd and Yes.  With or without a visual enhancement, the album ebbs and flows with vibrant storytelling. It has a natural and unforced demeanor to it. A way of offering up imaginative imagery of exploration and adventure, much like reading Paulo Coelho’s “The Alchemist.”

This album is Dungen’s own psychedelic exercise in their own ability. An instrumental score such as this, not only offers listeners an insight as to what these four Swedes are capable of, but a reveals a touch of their personality, sense of humour, and intent as artists. They honoured the vibe of the film while maintaining their own character. The result is at times cheerful,  and melancholy at others — somber, thoughtful, dreamy and wistful.  Häxan is an ethereal work that is both noteworthy and easy to enjoy.

After majoring in business & entrepreneurship at UCSB and traveling the world, Andrew moved to Los Angeles to pursue music and not give up his love for surfing, hiking and yoga. He is also in a couple really cool, up and coming, indie-rock bands in LA - Mothlight & Lone Kodiak.
RELATED ARTICLES
album reviewsmexican summer
8.0