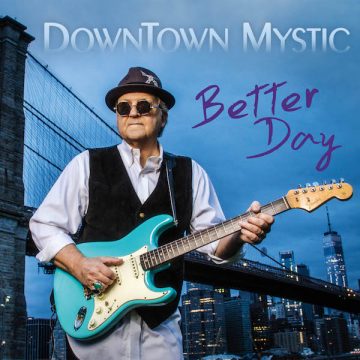 Some albums have strange fates. They come, disappear without a trace and then magically reappear a few months, a few years, or a few decades later.

New Jersey’s Robert Allen, aka DownTown Mystic, is old enough to know that, but as an obviously optimistic man, he keeps his hopes high that Better Day, his second album proper will make it second time around, and it certainly should! Released initially in January 2020, it is now having its second coming a few months later. No change in tracks or mixes, but times have changed, the world has turned upside down, and we all certainly need a better day!

It is not only Allen’s unabashed optimism that will help, but also his obvious knowledge of musical days gone by, days when artists like, Tom Petty, The Eagles, Bruce Springsteen, and even Chuck Berry ruled the airwaves. However, just re-hashed familiarity should not suffice. You have to have all those sounds in your back pocket and still give it a bit of your soul, if nothing else. Allen passes all of these tests with flying colours, giving us some much-needed heartwarming sounds in these hard times.

Formerly a lot of things, including a journalist and a translator, currently a freelance writer living in The Netherlands.
RELATED ARTICLES
album reviewalbum reviewsbetter day
8.0