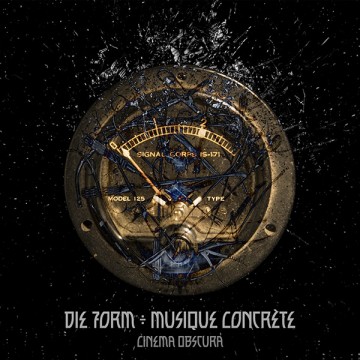 Cinema Obscura is a menacing oddity that harkens a return to the experimental and obscure roots of Philippe Fichot’s body of work. This new disk was strategically released on the revived Bain Total label, creating a clear distinction between it and the last Die Form album. If Rayon-X aimed to make the club kids dance, Cinema Obscura invites them to drink all the fun stuff under the sink – it is avant-garde, dark, bizarre, marvelously brilliant and utterly alienating all at once.

For some context, musique concrète is a late 1940s French movement that attempted to design sound by unifying noise, language and musicality. If that sounds like high-brow academic sophistry, it’s because that’s precisely what it is. To really understand this new Die Form album, you need some college grade courses in art history, musicology and linguistics; to appreciate it however, all you need is an open mind. It’s an acquired taste most certainly, yet it stands to make the strongest impression on an utterly untrained and unassuming audience. The sonic shock of >Cinema Obscura is a fertile ground for revelations into how we relate and engage with music and technology.

Using raw sampling techniques, this genre is the acoustic equivalent of found object art, a pastiche of suggested moods and euphonious impressions. Cinema Obscura is an experiential delight and entirely open to interpretation. Even in the thunderous chaos of seemingly disjointed bird calls and piano notes, there is a subjective logic that elicits emotion. Whether you find these tracks disturbing, liberating, wrathful, tender, evil or angelic, the style’s virtue lies in the subversion of definitive meaning. If you’re new to industrial music or Die Form, Cinema Obscura is not the album for you. Noise and experimental fans however will rejoice in this delightfully strange production.

I’m a geeky weirdo with her fingers in all sorts of pies. I paint and illustrate all sorts of nonsense, I make strange noises. I rant and rave, set things on fire, I’m an awesome cook and I throw a mean party.
RELATED ARTICLES
album reviewstrisol music group
8.0