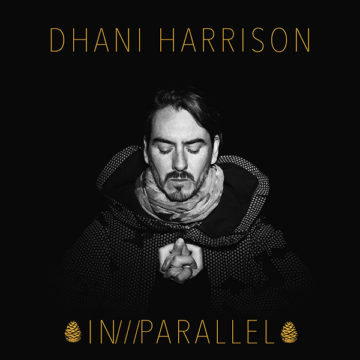 It cannot be easy being the offspring of a Beatle in the music world. Stella McCartney has done extremely well in fashion, and Mary McCartney has carved out her own niche in photography, but when it comes to music, Beatle children struggle. The bar is set impossibly high by your father, and people make the assumption that you make music “just because” their dad was a Beatle.

Dhani Harrison has been making music for a long time, mainly under the band name Thenewno2 The first release came was  2006’s debut EP, EP001. The band went on to record three moody, brilliant albums. He also played with Joseph Arthur and Ben Harper with the band Fistful of Mercy. From this trio came the stunning album As I Call You Down (2010). In///Parallel is the first album Harrison has issued under his own name,making this his debut solo album.

Harrison is an interesting mix of past and present. Let’s not forget that he was responsible for his father’s posthumous release Brainwashed, put together Concert For George and oversaw the reissue of his dad’s catalog. But, he is well aware of the current music scene, the players and the trends. What he does is take this and mix it with his knowledge of the history of rock. The songs sound timeless and do not fit any one category. Alternative rock, psychedelic, ambient, rock. It all goes into the mixing pot and out comes his own distinct sound.

Joining Harrison on this album are Los Angeles artist Mereki, who provides vocals on the incredible “London Water”. A great example of mixing 1960’s psychedelia with 2017 alternative rock. Her vocals fit perfectly with Harrison, and the result is a melodic song with a lot going on underneath. She appears on one other song as well. Camila Gray (Uh Huh Her and Summer Moon) also puts in a performance on the single “All About Waiting” and it proves to be another good fit for Dhani. Dhani’s vocals in this song are fantastic and adds to the overall ambience of the song.

Harrison’s guitar work throughout the album is nothing short of inspiring. He uses his guitar in many different ways and as the perfect tool to express his emotion. A lot has gone on for Harrison during the last few years, and it all comes out through his guitar. Guttural at times, melodic at others, and sometimes just plain disturbing. But it all works and it is all part of the puzzle that makes up In///Parallel.

Harrison is a strong lyricist and creates images and moods. The songs appear one way on the surface, but dig down and other images and scenes appear. Listen to “Summertime Police”, “Sitting by country stream, I learn to feel police. My teacher said to me, One of these mornings you mustn’t dare to dream.” There is a lot going on in his lyrics and well worth the time to explore.

In///Parallel is a brilliant album. It should be regarded as the modern classic it is and deserves a great deal of attention. Harrison is a brilliant musician and writer. He is not afraid to take risks and this is evidenced throughout the entire album. A stunning debut.