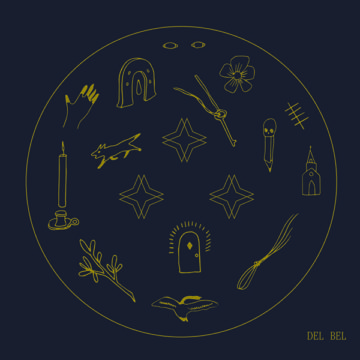 Fittingly titled III, Del Bel’s third album features a large assortment of instruments such as synths, violins, electric bass, and trumpet. While it is a fairly rich album and does show off the band’s talent for music, there are times when it falls short of being a top-notch album.

III can’t and shouldn’t be restricted to one single genre because there really isn’t any one box to contain it. There are hints of different genres littered through all the tracks; smooth jazz, indie pop, and noir to name a few. Despite that, what all the songs have in common is that they’re elegant, sultry, and utterly beautiful.

The band from Southern Ontario has an ensemble of talented musicians. There are ten members in the band, some like Tyler Belluz and Karen Ng play multiple instruments.

There are a few songs that are easy to get stuck in someone’s head. The opener, “Do What the Bass Says”, is a sultry and smooth tune and, coincidentally, has a lot of bass. What wasn’t expected was the short rap clip that spices up the track. Then, there’s “Crookcrank”. Again, it’s jazzy, smooth, and easy to catch yourself singing it later in the day. The guitar plucking gives it a bit of grit, while the much-appreciated trumpet keeps it lively. There’s something about “Interlude” that makes it haunting and mysterious. Unlike “Go On”, it’s an instrumental piece, which may be the reason why, giving the listener a moment to appreciate the music without Lisa Conway’s beautiful voice.

However, “Interlude” also serves as a divider between the different songs. Now, from slower and more polished pieces, what follows is a collection of more upbeat and busier tracks. Some songs like “Put Me To Bed With A Shovel” are entertaining and fun to listen to, while others like “ShapeShifters” don’t leave much of a lasting impression. “Maybe There’ll Be A Lightness” works well as a final song at points. The transition from “Put Me To Bed With A Shovel” to “Maybe There’ll Be A Lightness” is drastic; when the previous song ends, this one begins with soft vocals and light plucking of the guitar. The abrupt end leaves the listener in silence with a ringing in their ears and a hope for more to come.

Music and writing have always been a big part of Sabrina's life. She would "borrow" her dad's rock and metal CDs from his collection and listen to them while going through the art books. Although she doesn't write angsty poetry anymore, she does have a Bachelor's Degree in Journalism which she uses to pursue a creative career path. When she's not writing, Sabrina can be found juggling a coffee cup and DSLR or Instagramming her food.
RELATED ARTICLES
album reviewsiiimissed connection records
8.0