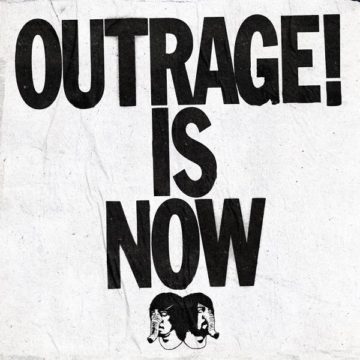 Death From Above
Outrage! Is Now
Last Gang Records

Death From Above’s album just dropped and once again they’ve proved that in the hay day of two piece bands, they have serious staying power. Setting them apart, Outrage! Is Now is loud, visceral and flat out impressive. This album is filled with intense lyrics, unbelievable instrumentals and the true Death From Above sound that fans adore. While the album isn’t getting the rave reviews their past two full lengths have received, this writer sees that as a serious oversight.

One thing that strikes a chord right away is the immensely beautiful vocals of Sebastian Grainger.  While ripping on the drum kit, Sebastian has managed to improve an already impressive voice.  This album features larger crescendos and builds, showing that Seb knows when to back off and when to hit a song hard. This goes a long way in creating variation in sound.

“Nomad”, the opening track gives fans what they’ve waited three years for- an angry, harsh sound with clever phrasing and tight drums. Followed up by the album’s first single, “Freeze Me”, this track contains hints of Linkin Park over delightfully choppy keyboard.

The highlight of the album comes at track three with “Caught Up” which provides a raw, gritty sound meshed with tantalizing vocals a la Arctic Monkeys’ Alex Turner. Contrasting that sound, the chorus is somewhat poppy and light which provides a nice reprieve from the rage shown on other tracks.

A shining gem on the album is the single “Holy Books”. Closer to their pre-breakup sound, this track tackles religion and ancient traditions with unabashed discontent.  Jesse builds with loud bass before relinquishing the track to Seastian’s haunting vocals singing, “Stone me to sleep”.

This album shows promise and passion lacking in many two-piece bands these days. Staying loud and true to their sound while still growing, Death From Above have laid down a serious album that ought not be overlooked.

Gabrielle Mueller is a lover of all things music, writing and charcuterie boards. Gabrielle has a particular passion for music of the 1960s and the hippie movement in Toronto’s Yorkville district. Gabrielle runs her own music website, The Hippie Historian, where she reviews concerts, interviews musicians and writes about music history that spans the ages.
RELATED ARTICLES
album reviewsdeath from abovedfa
8.0