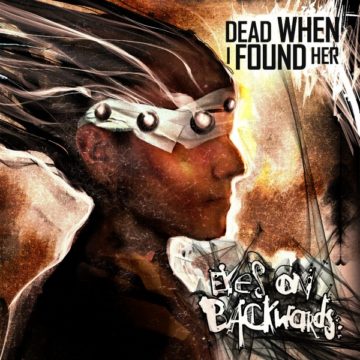 Dead When I Found Her
Eyes On Backwards
Artoffact Records

Eyes on Backwards is an eerie industrial-electronic album from EDM band Dead When I Found Her. The brooding collection of songs are made with heavy synths, looped beats, and audio clips from old films. Using a variety of ranges from his own voice, Michael Halloway added another layer to his work: making this intricate collection urgent and, at times, aggressive and furious.

The Oregon artist has worked on the project for some time, but didn’t release an official album until 2010. Halloway doesn’t restrict himself from using solely computers or synths. There are percussion instruments used to add to the complex songs. Something noticeable is the use of simple and short phrases that often hold a lot of meaning.

The first song that plays, Tantrum, opens up with a light synth loop and an audio clip before dropping the full beat. The song gets down to business and the listener gets hit with a heavy dose of what Dead When I Found Her is all about. This particular song is similar to the shock rock/metal sound that was popular in the late 90s and early 2000s, and it’s nice to hear a nod to that.

High Anxiety sticks out on Eyes on Backwards because of how different it is. The song is right in the middle of the album, and is a lot lighter than the furious nature of the rest. There’s the constant voice of a woman thanking someone for treating her like a normal human being and yet, admitting she is not. As solemn and sad as that is, it’s still consistent with Dead When I Found Her’s other work and doesn’t sound out of place – just different. It’s haunting and stirs something in the listener.

Electronic and industrial fans, whether they’re die-hards or just getting into the genre, should definitely take a listen to Dead When I Found Her’s Eyes on Backwards. It’s creepy, heavy, and complex, making for a great addition to their collection.

Music and writing have always been a big part of Sabrina's life. She would "borrow" her dad's rock and metal CDs from his collection and listen to them while going through the art books. Although she doesn't write angsty poetry anymore, she does have a Bachelor's Degree in Journalism which she uses to pursue a creative career path. When she's not writing, Sabrina can be found juggling a coffee cup and DSLR or Instagramming her food.
RELATED ARTICLES
album reviewsartoffact records
8.0