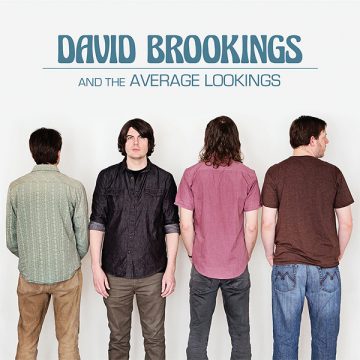 Power Pop is a musical genre for true believers, artists and listeners alike. Relentlessly upbeat – even when the subject matter is melancholy – Power Pop charges ahead, determinedly uninterested in bowing in the direction of the latest current and transitory musical fashions.

Sales figures aside, a lot of great music has come out of the Power Pop field. While the term was arguably coined in the 1960s by The Who’s Pete Townshend, most music scholars place their pushpin a decade later, in the musical timeline that began with Badfinger, Big Star, and the Raspberries. Using those groups as something of a conceptual jumping-off point, countless thoughtful musicians have crafted durable music in the style.

David Brookings is such an artist. His music – as showcased on the new CD David Brookings and the Average Lookings – bears all of the necessary hallmarks required of top-notch Power Pop: solid, mid-tempo melodies that stick in the listener’s memory after the songs fade; carefully-crafted close vocal harmony; chiming guitars; and freedom from musical gimmickry.

There’s just the right amount of muscle in tunes like “You’re Right, It Went so Wrong.” Brookings is adept at channelling bittersweet sentiments into drive-with-the-top-down, sing-along rockers. And when he dials back the rocking – as on “Don’t Stop to Doubt Yourself” – he showcases the versatility of his writing and arranging skills (all 11 tunes on the album are Brookings originals).

Even when he heads in a bouncy country-rock direction (“I’m in Love With Your Wife”), Brookings’ Pop sensibility remains closer to the Beatles than to Buck Owens. And he shows impressive composition prowess with “Place We Can Go,” seamlessly shifting between major and minor chords. Intelligent and subtle uses of violin, cello, trumpet and saxophone show Brookings’ admirable restraint, and make clear his intention to keep the focus on the songs themselves, adding only what is needed, always in service of the song.

Brookings has been working his way west: originally from Richmond V.A., he moved to Memphis – a fertile musical ground if there ever was one – where he cut a trio of albums in the legendary Sun Studio. Eventually landing in California, the singer/guitarist put together a band and continued to record and perform. David Brookings and the Average Lookings is his fifth full-length album, and showcases his knack for composing straightforward tunes that nicely balance pop and rock: not too noisy, never too sweet, but always hitting the musical sweet spot.