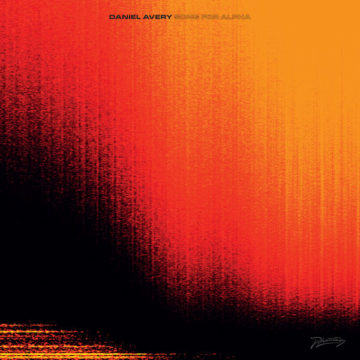 It is very clear that in the five years that have passed since Daniel Avery’s critically-acclaimed album debut Drone Logic, he has been anything but idle. Not content with simply making his own music, Avery has also traveled extensively, hosting DJ sets at many of the most respected venues in the world. That experience, combined with an already impressive ear for electronic capability, yields impressive results on his sophomore album release, Song for Alpha, which is a step away from the dance-friendly techno of his previous work, instead submerging his listeners in a moodily atmospheric other world, ambient and deep.

The album begins with “First Light”, a track that is painfully reminiscent of some of Brian Eno’s best work such is its ambient feel; two other tracks short on duration but heavy on ambience are “TBW17” and “Embers”, both of which show the softer and maturing side to Avery’s ability to create a vast and varied soundscape.Though these moments of gauzy softness are significant, it is Avery’s layering of sound, his ability to build up and then take apart a song over the span of 5-7 minutes that is the standout element of this album. This is an album that is painstakingly crafted with atmosphere and tone clearly at front of mind, with a purposeful tension created by the duelling themes of ambience and tempo.

Though the majority of the songs on this 14-track, hour long album are exemples of Avery’s impressive layering technique, the fifth track “Sensation” is the process in one complete song. Beginning and ending with a steady drumbeat, Avery guides his listeners through the realm of electronic production possibility; perhaps the process is more mathematical as he adds and subtracts elements with subtlety and timing, building the song towards the climax long before traditionally would make sense, before allowing the listener to decompress slowly, catching our breath with each sonic subtraction.

Though it starts as it means to go on, Avery creating an immersive sonic landscape with each new song, the real strength of the album lies in the later tracks, particularly the transition from “Embers” to “Slow Fade” and the album’s standout track, “Glitter”. The one miss on this album is a glaring one, and the reason that track seven, “Clear” doesn’t work is because it is the lone departure from the duelling themes of ambience and tempo such that it feels like unwelcome noise in comparison.

There is no doubt that although he is only 32 years of age, Daniel Avery is a light that burns very brightly in the world of techno and EDM, both on the dance floor and in the dark corners and quiet spaces in between.  This is an album not to be missed.

Br. lives in southern Ontario, grew up on The Beatles and The Journeymen, spent his adolescence immersed in grunge, and his adulthood in British alternative. His greatest joy is seeing his son dance and grow into his own appreciation of the indescribable joy of music...
RELATED ARTICLES
album reviewsmute records
8.0