SPILL ALBUM REVIEW: CRYSTAL FIGHTERS – EVERYTHING IS MY FAMILY 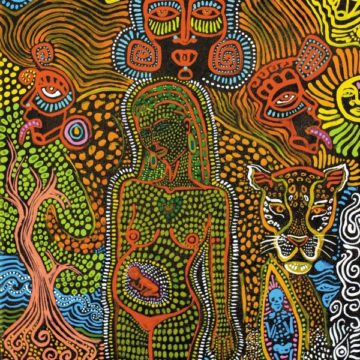 Crystal Fighters
Everything Is My Family
Zirkulo/PIAS/Atlantic Records

The third studio album from pop party band Crystal Fighters is Everything Is My Family. A truly international band, Crystal Fighters is composed of Sebastian “Bast” Pringle (guitar and txalaparta), Graham Dickson, and multi-instrumentalist Gilbert Vierich. Following the 2013 release of their highly acclaimed album Cave Rave, the band spent three years touring the globe, learning to play forgotten instruments everywhere they went. The new album embodies the band’s lust for life and, as Bast says, “It’s more dancefloor, more psychedelic, more tropical, more sunshine and more pretty much everything.” Bast and the boys live up to the high praise for their party pop sound most of the time on Everything is my Family, especially with bangin’ tracks like “Yellow Sun,” “Good Girls” and “In Your Arms.” However, less successful is the opening monologue, which seems unnecessary, and tracks like “Fly East,” which clocks in at an almost seven-minute mishmash of guitar, symphonic, and electronic sounds that seem like a trip to nowhere. Fortunately, the band returns to fighting form on the final two tracks, “Living The Dream” and “Lay Low,” and closes out the collection in fine form.

SPILL ALBUM REVIEW: CRYSTAL FIGHTERS – EVERYTHING IS MY FAMILY

Gerry Young is President of Current Records and Management, and author of the 2011 biography Pop Goes The Weasel: Rock And Roll Off The Record, available at Indigo/Chapters, Barnes & Noble, and Amazon.com. He has recorded and managed Juno Award winning bands Martha And The Muffins and The Parachute Club among others.
RELATED ARTICLES
album reviewsatlantic recordscrystal fighters
8.0