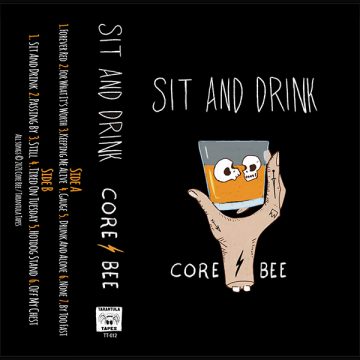 Normally on bass with Heavy Petter and on drums with The Speed Humps, Barrie, Ont.-based artist, Core Bee, has released his second full-length solo release, Sit And Drink. With the exception of a few guest appearances from local artists, the album was written, performed, mixed, and mastered entirely by Bee and carries a distinct alternative tone to the singer-songwriter genre.

Opening with the country flair of “Forever Red”, Sit And Drink kicks off with an unexpected note that you’d never guess it would, based on the album art featuring a tattooed hand holding a glass of whiskey with skulls for ice cubes. The lush acoustic guitars give a full-bodied and warm tone for Bee’s nasal and snarling vocals to front. It is certainly a surprise, but as Sit And Drink continues with the acoustic instrumentation on “For What It’s Worth” and “Keeping Me Alive”, it is clear that Bee has stumbled on a unique sound all of his own.

It is difficult to describe the tone and style of Sit And Drink. With a country and singer-songwriter style running abundant from front to back, being matched with a biting punk rock attitude, Sit And Drink falls in line somewhere with the acoustic work of other punk greats – think Green Day’s “Good Riddance (Time Of Your Life)”. This is especially apparent through songs like “Gauge”, “Drunk And Alone”, the title track accented with its electric lead lines, and “Hotdog Stand”. There is a grungy aesthetic to the record that makes Sit And Drink feel like an unearthed cassette from the mid ‘90s.

Is Sit And Drink a polished release? Not at all; however, it carries a sense of honesty in the songwriting and feels like a genuine form of heartfelt, artistic expression. For all its flaws, Bee has delivered an album full of charm that falls between punk and alternative rock, along with the singer-songwriter genre. This surprising album will leave fans excited for the next installment from Bee.

A passion for music has always been a part of Gerrod’s life. As a young boy, he was raised on a steady diet of the music from The Chili Peppers, Aerosmith, The Stones, Prince, and others from his mum. Raised in the GTA, Gerrod continued to foster his love for music by attending a wide range of concerts and learning the drums. His unapologetic passion for music has no bounds and has spread to a wide variety of styles, whether it be the 90’s rock that sound tracked his teenage years, the jazz he studied in university, or his newfound love for hip-hop. He recently received his bachelors in music and education from York University and is passionate about writing and reviewing good (and less than good) music. Gerrod is also the drummer and songwriter for a Toronto based rock & roll band, One In The Chamber.
RELATED ARTICLES
album reviewalbum reviewsheavy petter
8.0