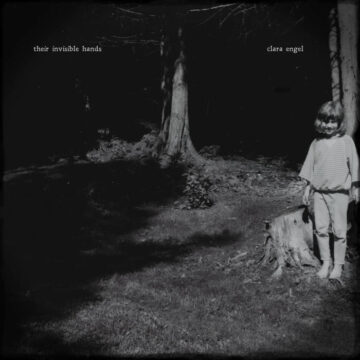 Don’t be fooled by the list of ‘thank you’ names Clara Engel dedicates on the album page of her latest album ‘Their Invisible Hands,’ some thirty or so names.

Toronto’s Clara does all herself here, except “Words to O Human Child,” where Engel takes the words of W.B. Yeats’ “The Stolen Child.” And that everything includes voice, cigar box guitar, talharpa, shruti box, melodica, found percussion, tongue drum, chromonica. Yet another long list, that also includes home recording and production.

Of course, with a beginner musician, such an attempt often goes awry, but Engel has been around for some 18 years now and lists as many (or more) releases than that ‘thank you’ list has names on it, and her brand of ambient folk blues, or as some call it  ‘minimal holy blues,’  or as she puts it ‘like something dug out of the earth but slightly luminous’ seems only to grow stronger and better.

Engel has an excellent voice and uses all those cigar box guitars and shruti boxes to their best effect, creating an almost eerie atmosphere, which at moments scares at other soothes to best effect.

Oh, it simply makes you start sifting through that very long list of Engel’s previous releases.