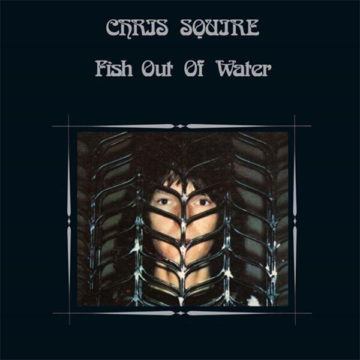 Fish Out of Water was released in 1975, when Yes was on a hiatus. Following 1974’s Relayer, the band took a break while members pursued solo projects. Fish Out Of Water was Yes’ extraordinary bassist Chris Squire’s first and only solo outing. The album, simply put, was and is a remarkable achievement. In many regards it was as good as any Yes album and it was an album that Squire took great care in assembling. He called in his friends, including fellow Yes member, Patrick Moraz on keyboards, Bill Bruford on drums, Mel Collins on sax and the incredible Barry Rose on pipe organ. Squire plays perfect bass and the vocals. At times he sounds like a tame Jon Anderson. Although he did release two albums with Billy Sherwood, and  a Christmas album in 2007 as ‘Chris Squire’s Swiss Choir’, Fish Out Of Water was his only true solo album. A shame, as it is really good.

Squire also employed an orchestra. This was a crowning achievement as he incorporates the orchestra beautifully into the songs.  Never overpowering, but the perfect mix. Musically, this is prog rock, but extremely accessible and melodic prog rock. At times, it is a blend of pop and prog producing a very unique and wonderful sound.

The new issue of this album, which comes in a variety of formats, also features some interesting bonus tracks that fans will enjoy but more than that, really add to the album. One of the most welcome additions to the album is the obscure single Chris Squire issued with Yes drummer, Alan White, “Run With The Fox” and “Return Of The Fox”. Perhaps not worth the price alone, it is absolute treat to have them included. They sound exciting and fresh and one realizes that the single was released at the wrong time (1981) when it did not have a chance for radio play. It is the first time these songs have appeared on CD and it shows many what they had missed.

There is a new mix of the album and the original mix, both sound great. In any format, this album is long overdue for the ‘extended’ treatment. Fish Out Of Water is a brilliant album, that although a success at the time of release, it has largely been forgotten over the years. It is time to rediscover this piece of classic rock history. Given that Squire is no longer with us (he passed away in 2015), it is clear that Jakko Jakszyk, who assembled this collection, is not only a fan but someone who is very protective over this material.

This is an excellent reissue of a lost classic. In its expanded release, they have made the record even better. Pity he only did the one.

Born and raised in Whitby, Aaron discovered music through his love of The Beatles. This led to a career in radio, writing for various publications, and ultimately a radio show about The Beatles (Beatles Universe), which ran for over four years. When not immersed in music, Aaron enjoys spending time with the loves of his life -- his wife Andrea, and daughters Emily and Linda (all of whom have an intense love of music too).
RELATED ARTICLES
album reviewscherry red recordschris squire
8.0