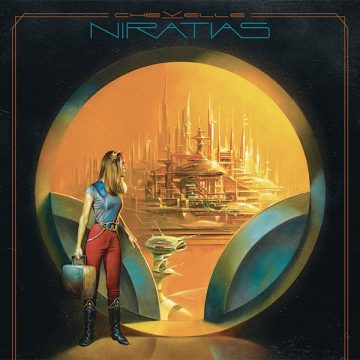 With artwork nostalgic of a 1970’s science fiction novel, thanks to  Boris Vallejo, Chevelle have released their latest album, NIRATIAS (Nothing Is Real And This Is A Simulation), a hard rock epic with slightly progressive inclinations. As a follow-up to 2018’s compilation, 12 Bloody Spies: B-Sides And Rarities, NIRATIAS marks a major return for the band, serving as their first collection of truly new, original recorded material since 2016.

Chevelle open NIRATIAS with the sludgy stoner-doom metal waves of distortion of the instrumental track, “Verruckt”. The track absolutely rips, demonstrating fiery riffs and varying passages. Furthermore, the tones the band is channeling across the board – guitars, bass, and drums – sound absolutely fantastic. While NIRATIAS may not be for everyone, there is no denying that, sonically, it is one of the best sounding rock/metal albums in recent memory. The album follows up such a simple, yet engaging, instrumental track with “So Long, Mother Earth”, a song that builds naturally off the instrumental opener, giving the impression that the former serves as an extended introduction. The two together raise the bar for the rest of the album, and while NIRATIAS is a strong album, it never quite hits the heights of “Verruckt” and “So Long, Mother Earth”.

The remaining 11 tracks sees some absolute hits, alongside, lesser songs that seem to meander across a straight-ahead idea. While songs like “Self Destructor”, the melancholic ballad “Endless”, and “Remember When” are by no means weak songs, they simply fail to reach the high bar Chevelle have set for themselves on NIRATIAS. The album, on the other hand, soars when the band dig deep into their unique sound that straddles hard rock and alternative metal and deliver such songwriting in an explosive and dark manner. Tracks like “Mars Simula”, “Pistol Star (Gravity Heals)”, and “Peach” are definite highlights that do exactly that and bring the album to life in an incredibly exciting fashion. Even more so, “Ghost And Razor” revels in a darkness that is reminiscent of both Deftones and Tool.

The new space age is upon us and Chevelle has written the soundtrack warning of the dystopian future that looks more like Blade Runner and Total Recall than we’d like on NIRATIAS. The album ties together a tight recorded performance that sounds larger than life along with strong, unique songwriting that propelled Chevelle forward for just over 20 years. Despite the slight but apparent disparity between tracks, NIRATIAS marks a strong return for Chevelle, and  is equally compelling as it is provocative.