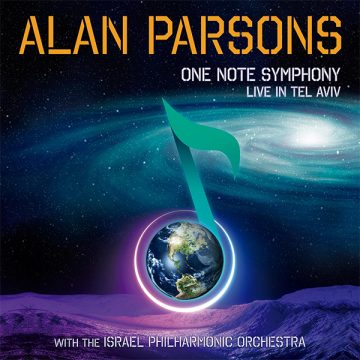 Alan Parsons recently released a live album on November 5, 2021 (The Never Ending Show: Live In The Netherlands), and has followed that album with another yet another. One  Note Symphony: Live In Tel Aviv, is special however, not because it was recorded in Tel Aviv, but rather due to the addition of the wonderful and world renown Israel Philharmonic Orchestra. This particular concert was recorded in June, 2019 while Parsons was promoting his then new album The Secret.

At this point, two live albums, three months apart may seem excessive, and in some ways it is, but Parsons is smart and aware that fans will want to own these shows, and that they also serve as a documentation of his lengthy 2019 tour. The Alan Parsons Project was formed as a studio band and never toured, but since he has gone solo, Alan Parsons has not only toured extensively but has released a number of outstanding live albums. As it is Alan Parsons, these live records are going to sound fantastic, and One Note Symphony: Live In Tel Aviv is no exception. I

One Note Symphony: Live In Tel Aviv  opens with “One Note Symphony”, originally from The Secret. Quite frankly, the live versions from that album stand out in this collection. “The Sorcerer’s Apprentice” is absolutely vibrant with the orchestra backing, and “As Lights Fall” is majestic while maintaining its gentleness. Parsons’s vocals are particularly engaging as well. It is a beautiful performance of one of his best ever songs.

Elsewhere, the orchestra proves very useful for Parsons. His music has a touch of classical tones, so utilizing an orchestra makes sense. This is not the first time he has released a live recording with an orchestra. However, in this show, the orchestra is used sparingly at times such as in “I Can’t Get There From Here”, which is also from The Secret, while in other songs they are pretty much the focal point, for example  “Breakdown – The Raven”, where it is really works. However, at other times it loses something in the translation, such as “Don’t Answer Me”.

The best is left to the last, with a fantastic, rocking version of “Games People Play”, which features a strong and melodic guitar solo and a pretty big bang for an ending. It comes alive and is well worth the admission alone

Overall, One Note Symphony: Live In Tel Aviv is  a great live release. A DVD/Blu-ray of the concert is also included, and it is also available on vinyl. The video is professionally shot and, again, in 5.1 cannot help but sound great. However, I think it is time for Mr. Parsons to write some new material and go back into the studio. The Secret was great, but as fun as these are, some new music would be welcome. Fans will enjoy this, but I am not so sure that it will draw many new members to his flock.