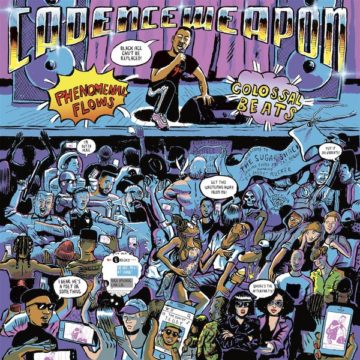 Hailing from Edmonton, Alberta, artist Roland “Rollie” Pemberton, better known as Cadence Weapon, recently dropped his fourth full-length release. The new self-titled album, has earned him his second Polaris Music Prize nomination. Cadence Weapon offers intricate writing complimented by effortless flows over a variety of smooth beats. Though lighthearted at times, the album’s subject matter has much to say about ongoing societal issues. Whether it be direct, like on the track “The System”, or snuck into a bar elsewhere, the 32-year-old rapper speaks to the challenges of being black in a society that continues to make social and professional life difficult for minorities. On the track “High Rise”, he tackles the increasingly popular real estate trend of condominium living in major cities, which results in isolation and loss of community for residents.

The album’s production is a consistent high point for the project. With standout tracks like the KAYTRANADA produced “My Crew”, Cadence Weapon is easy to digest with a mix of up-tempo and mellow beats. This project further proves Pemberton’s ability to output solid projects from front to back. Using his talent for writing, and his ear for beat selection, he continues to impress. If you haven’t already, make sure to check out Cadence Weapon, and keep an eye out for more of his upcoming releases.

Born the son of a lifelong musician, and brother to a professional travel photographer, Braydon has combined his passion for music and photos to carve his own path in the creative world. Based in Toronto, he can be found either at a concert or on the way to a photoshoot – always with a set of headphones in-ear.
RELATED ARTICLES
album reviewalbum reviewscadence weapon
7.0