AN INTERVIEW WITH LAURA SAUVAGE

An alias is a good way to free yourself up and change the way you do things. Singer-songwriter Vivianne Roy has carved out a creative space for herself under the alter ego of Laura Sauvage. She’ll be opening for Aidan Knight across Canada over the next couple weeks with her new album, Extraordinormal. I spoke with her recently about the new moniker.

(The references to Vivianne Roy and Laura Sauvage are somewhat interchangeable here. She isn’t too picky about it – it might help to consider this a bit of a “Bowie / Ziggy” situation.)

For Roy, this solo project is a departure from the folk sound of her other band, New Brunswick’s Les Hay Babies. The name change lets her music speak for itself, so fans can “randomly discover” the new sound she’s going for. This new sound – a nod to what Roy calls “anti-folk,” a musical style that’s a bit hard to nail down – evokes groups like Beck and Wilco, groups that made an impact early in her life. 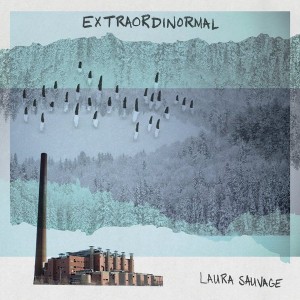 In the ’90s, Roy grew up on the sort of soundtrack any Canadian kid can relate to: her mom’s Columbia House CDs, Rock Radio, and MuchMusic (way back when that station played music). Even though she admits that Beck CDs are “kind of a weird thing to get for a six-year-old,” Roy began homing in on the styles she liked, and she continues to explore the artists who came before her.
“It’s important to go into a genre and be very authentic about it,” she says. And Extraordinormal is a great exercise in doing just that. Laura Sauvage recounts her own stories and observations, in her own voice, owing some sonic influence to the garage bands of her childhood.

“I like to keep it pretty minimal,” she says, and the classic guitars she uses – including a ’60s-era Eko from Italy she says is “f***ing weird-looking” – largely rock out in their own voices. When it comes to Laura Sauvage’s overall tone, Roy explains that “you’re basically recreating a room that you’re singing into … you shape your sound” with that room in mind.

Lyrically, Laura Sauvage might come across as aloof, but never cynical. There are gnarly takes on how messy and confusing romance is in your 20s, and the struggle to fit in. There is a tale, inspired by a hair-pulling fight Roy once witnessed, about ‘white-trash theatre, the drama you might see some unsavoury characters act out on the sidewalk in front of you. There is something relatable about Laura Sauvage, an honest point of view.

Roy is humble, and flattered by the positive attention Extraordinormal is earning. Over the next couple weeks, Laura Sauvage will be celebrating the album’s release, opening for Aidan Knight on tour, from Saskatchewan to B.C., before returning to Quebec for a show with Patrick Watson and continuing with a few headline gigs heading into the summer.

“I’ve listened to Aidan Knight since I was in high school, so I was super flattered when they asked us to open … I like meeting other people who won’t mind me talking about music or gear,” she says with a laugh. When you’re listening to Laura Sauvage, there is an intimate honesty. The songs aren’t heart-wrenching or flowery – they’re down-to-earth, like Vivianne Roy herself. If you have an opportunity to tune into these songs live, you won’t regret it.

Shane believes in music – the more honest, the better. He listens with his ears, which are really just a tool of the brain, which is definitely and completely subject to the whims of the heart. It's really a team effort.
RELATED ARTICLES
extraordinormalfeatureslaura sauvage
7.0

by Shane Davis on March 25, 2016
Laura Sauvage Extraordinormal Simone Records When it comes to being cool, the trick is to act like you don’t care. New Brunswick’s Vivianne Roy walks that line without [...]